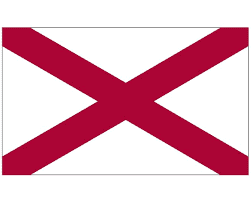 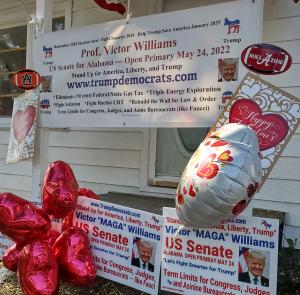 "Washington GOP hacks like 87-year old Richard Shelby and Old Crow McConnell are teaming up with monied Alabama Big Mules to dictate the next US Senator for Alabama. She is Shelby Intern Katie Britt.”
— Victor Williams, Alabama US Senate Candidate, TrumpDeomocrats.com

ORLANDO, FLORIDA, USA, February 27, 2022 /EINPresswire.com/ — At CPAC Florida this past weekend, a new insurgent political movement branded “TrumpDemocrats.com” was announced and the Alabama US Senate race was scrambled by a new entrant in Alabama's unusual, Crossover Primary happening on May 24.

The TrumpDemocrats.com organization “works in disruptive ways to reclaim the Democrat Party from the Marxists, Incompetents, Anarchists, and Academic Thugs who now control it.

And TrumpDemocrats.com works to support Donald Trump's return to the White House to 'Save America' in January 2025.”

The new organization TrumpDemocrats.com knows that the leaders of both national political parties (Republican and Democrat) are equally corrupt and cancerous.

The TrumpDemocrats.com launch was announced at CPAC by Pro-Trump Law Professor Victor Williams who is a well-known advocate for Donald Trump and the MAGA-America First movement.

In late 2015 and 2016, Williams was the first commentator to predict candidate Trump’s primary and then general election victories.

Williams founded “Law Professors for Trump” in 2016 to support the Trump, his nominations, and policies in the media, the public square and federal courts.

Willliams defended Trump with amicus curiae briefs at the Senate's High Court of Impeachment and later at SCOTUS.

With the new organization TrumpDemocrats.com, Victor Williams sends a message to anti-Trump Republicans that Trump has huge untapped support among working Democrats, Independents, Libertarians, and others.

When Donald Trump returns to the White House in January 2025, our 47th President will owe nothing to the establishment Republican Party. DJT will owe nothing but distain to Old Crow McConnell and his anti-Trump ilk.

As the first project of TrumpDemocrat.com, Victor Williams is personally scrambling the closely-watched race for the US Senate in Alabama.

On January 28, 2022, Victor qualified for the ballot as a Democrat to participate in Alabama's unique Crossover Primary of May 24.

After establishing his law teaching career in Washington, DC, Williams returned to summer in his adopted home of Fairhope, Alabama.

Victor Williams believes that his populist message for the US Senate reflects the hopes and dreams of ordinary, America-loving Alabamians.

In filing his papers for ballot access in the last hour of the last day for qualifying, Victor expressed surprise and disappointment at the weak, problematic group of candidates running for the open Senate seat.

“Not one of the declared candidates from either party could competently fight for America First policies in 2023-2024.

Alabamians are now supporting our campaign from across all partisan, political, and viewport perspectives.

Alabamians are questioning the lack of experience and competency of the other candidates.

Alabamians particularly resent Mitch McConnell coming into Alabama to anoint an inexperienced, unqualified former Shelby Intern/Staffer Katie Britt as their next US Senator.”

"Washington GOP hacks like 87-year old Richard Shelby and Old Crow McConnell are teaming up with monied Alabama Big Mules to dictate the next US Senator for Alabama. She is Shelby Intern/Staffer Katie Britt.

Give it to the anti-Trump, national Republicans, they treat their Interns quite well. No Holly Golightly powder room $50 loan for them.

Spin the Intern through the congressional employee revolving door twice so she comes out deputy press person and then top staffer.

Then set her up in a make-work "Business Council" gig for a couple of years to await instructions from the Old Crow.

"Katie was then selected as President and CEO of the Business Council of Alabama in December 2018, where she works to build a stronger business community. In this role, she serves on numerous committees and task forces, including Montgomery United Transition Committee."

YES — AND THE ULTIMATE TRANSITION IS FROM
SENATE INTERN TO A US SENATOR.
JEALOUS MUCH, MONICA LEWINSKY. "

Williams was also critical of Alabama GOP candidate Mo Brooks who was at one point at lead in the race, stating:

An indolent campaigner, Mo Brooks flushed away a huge lead in the race after receiving a DJT loyalty endorsement last year.

Brooks' indolence has now set up McConnell to come into Alabama to dictate to Alabama voters that .Shelby's unqualified Intern/Staffer will be the next US Senator.

Once again, Brook has done a serious disservice to Trump and to the America First ,movement.

Williams formally announced his Senate campaign on Valentine’s Day at his rehabbed, cottage home in Fairhope, Alabama to celebrate Alabama’s love of Donald Trump because of Donald Trump's open love of America.

Williams purchased the little Fairhope cottage listed for sale as a "teardown". to save it from the wrecking ball last year. He spent the past months rehabbing it to serve as his south Alabama living quarters and his state-wide Campaign Headquarters for Victor MAGA Willliams for US Senate. Like Big Jim Folsom would often say, Victor Williams invites all — " Y'all Come Visit Fairhope."

For those choosing a virtual visit, Williams offers his unusual, homemade website — TrumpDemocrats.com — which intertwines the love songs of Hank Williams and Leonard Cohen in the grand Southern historic tradition of music and politics.

Williams states he loves Donald Trump for too many reasons to list — but primarily because Donald Trump so publicly expresses his love of America.