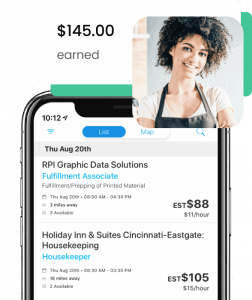 Choose When & Where You Work, All From Your Smartphone 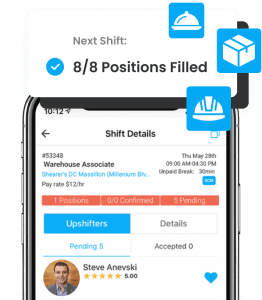 Upshift, a W2 staffing platform that connects businesses with the staff they need, arrives in Orlando and Tampa in time to fill the gap in post-pandemic hiring.

Employers need reliable, competent, and committed workers. Competent, committed workers deserve flexibility and security from their employers. We make sure they find each other so both sides benefit.”
— Alex Pantich, Chief Operations Officer and Co-Founder of Upshift

Upshift, an industry-leading staffing platform, today announced the opening of offices in Tampa and Orlando. Backed by Recruit Holdings, the owner of Indeed.com and Glassdoor.com, Upshift connects businesses with pre-vetted W2 employees with a success rate of over double the industry standard (over 90%).

‘Hiring is resource intensive because traditional strategies require employers or temporary work agencies to reach out to candidates at a high volume, guessing at the rate structures, work schedules, and benefits that might be motivating,’ says Alex Pantich, Chief Operations Officer and Co-Founder of Upshift. ‘Upshift flips that model—workers drive the process, and they find a much faster, more successful fit.’

The labor market has been particularly constrained during Florida’s recovery period; as jobs reopen across almost all industries, Florida employers continue to struggle with labor shortages at a scale that mirrors national levels. Upshift’s opening will support Orlando’s Amway Arena and Camping World Stadium, Tampa’s Convention Center, as well as multiple other large hospitality venues and foodservice operators across both cities.

Sporting an impressive show-rate of above 90%—roughly twice the market average for traditional temporary work agencies—Upshift takes the heavy lifting of candidate vetting off of the employer’s shoulders. Rather than rely on outdated processes like reference tests or resumé checks, Upshift interviews candidates in person at a designated meeting time. Punctuality, responsiveness and responsibility are key characteristics of every ‘Upshifter’; the company accepts roughly 12% of applicants, putting only the best, most reliable candidates in front of in-need employers.

For workers, Upshift represents the marriage of flexibility and support, a combination that will be far more prevalent in the post-pandemic normal. Upshift classifies each worker as a W2 employee giving them access to medical and other benefits, daily payments after the second paycheck, and the possibility for full-time work. With no work minimums, Upshift makes possible the idea of ‘unlimited, unpaid vacation’; candidates can sort through available shifts and establish the working structure that works best for them, increasing the likelihood that they’ll not only show up as scheduled, but that they’ll stay with the company.

‘Like all things, the value of an hour is changing,’ says Steve Anevski, Upshift’s CEO and Co-Founder. ‘We help employers broaden their candidate pipeline by offering real-time data that helps them stay on par with the rates and benefits that are competitive in their space.’

In a recent survey of 2,000 small businesses, 41% reported an increase in hourly wages as a strategy to combat the growing shortage. But there remains a gap between employer's rates and employee's expectations; offering a more transparent look at the adjusted average by sector will bring employers closer to achieving the robust and talented applicant pool they’ll need.

Founded in 2016, Upshift has expanded from its Cincinnati roots to help employers across various industries in some of America’s largest metropolises, including Atlanta, Charlotte, Dallas, Houston, Cleveland, Nashville, and Florida’s own Miami.

‘We look forward to connecting with the workforce in Tampa and Orlando,’ says Anevski. ‘When employers and workers operate in symbiosis, the positive effects compound, and they’re felt throughout the entire economy—we want to set that in motion.’

Upshift is a tech-enabled, on-demand W2 staffing platform revolutionizing how workers access jobs and how businesses find, schedule, and manage their contingent workforce. With workers who have a 90%+ show rate—nearly twice the market average—Upshift saves employers valuable time and staffing resources, and helps employees find the support they need to take their place in the recovery economy.