Ari and Her Aunt Jennifer 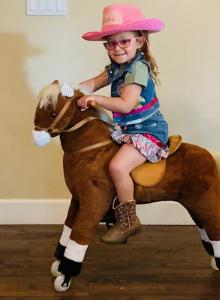 Aria on Her Toy Horse 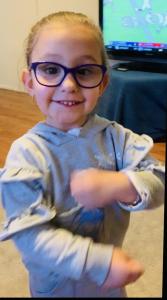 I am asking the public to demand that Aria's case be investigated, the inexcusable trauma this baby has been put through by those who were supposed to protect her be answered for”
— Jennifer Krahn

DAVIE, FL, UNITED STATES, July 12, 2021 /EINPresswire.com/ — The shocking case of a five-year-old autistic child who was snatched out of her own home by a man claiming to be the father has recently come to light. The gravity of this story is too strong to be ignored, as this is a classic case of humiliation, dehumanization and racism. The story of Aria Nicole is the epitome of injustice and the flawed execution of the law.

Aria Nicole was born to Jamie, an intellectually disabled young woman. The baby was showered with love and affection from her mother’s immediate family, Jennifer, i.e., Jamie’s biological sister. Jennifer was moved with compassion and love for the child, and so since the day of this baby’s birth Jennifer felt compelled to become a part of her life. Knowing her sister’s needs, Jennifer looked after her niece, treating her like her own child.

But trouble entered this family the very day little Aria was born. Jorge Perez, showed up at the hospital claiming to be the father. When Jamie denied this, he returned one day and signed the birth certificate without the mother’s consent or knowledge. A fact he admitted to in court. It was Jennifer her aunt and Special Education teacher with a MA degree and Autism authority who recognized the signs of autism in Aria. She immediately had her assessed so that, even though autism isn’t curable, early intervention would help her cope as she grew. Jennifer faithfully attended Aria’s early intervention services, despite working 40 hours a week.

Things began to go downhill when the alleged father demanded placement of Aria. On March 6, 2019 The County of King’s Superior Dependency Court Case # 19JD-0580 , threw aside the fact that Jennifer had looked after the child since birth or that she had tended to the child’s special needs. The court paid no heed to the sacrifices Jennifer and her husband who are both USA military veterans made for this child. Through unjust means and falsified statements by social workers, Aria was torn away from her biological family and rightful guardians and handed over to a man who has a long history of drugs, criminal records and misconduct. When Jamie revealed that she had been raped by Jorge, King’s County authorities dismissed her statement.

Hanford, CA is a small town says Private Investigator, Chris Cavallo, a seasoned investigator specializing in Child Custody Investigations. “The evidence and events that took place are completely incredulous which is why I took this case pro bono. The injustice this family and child have endured by government authorities is appalling and demands answers. Usually with child custody cases we are requested to prove one parent’s negligence while in their custody which is usually proven by comprehensive background research including social media postings ,observation, and written documentation, supported by digital film evidence. This case even with all that Jennifer and her sister Jaime have been through, they should never have been dragged through the court system especially with Jorge unequivocally knowing that he was not Aria's birth father which was proven by DNA evidence."

Refusing to give up the fight, Jennifer who is really the hero of this story although to modest to admit it has continued to find ways to bring Aria back to where she belongs. She has spent her entire life savings in the process. Recently Jennifer asked who Jamie believed was the biological father to take a paternity test. He agreed and the result? 99.98% that he is in fact Aria’s biological father, not Jorge.

“I am asking the public , the legal community, law enforcement and investigative reporters to demand that Aria's case be investigated, that the inexcusable trauma this baby has been put through by those who were supposed to protect her be answered for. That Aria be returned to her biological family and that her rights be honored,” says Maternal Aunt Jennifer Krahn .
Media contact:
Chris Cavallo
Chris@CSI-SecureSolutions.com