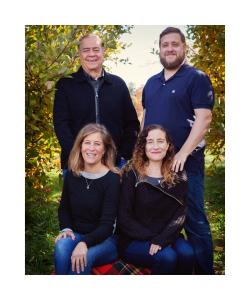 The Kramers have been long time supporters and Ner Tamid members since 2013, and I am profoundly appreciative that they have chosen to honor me in such a significant way”
— Rabbi David Steinhardt, Senior Rabbi at B’nai Torah Congregation

BOCA RATON, FL, UNITED STATES, April 20, 2022 /EINPresswire.com/ — B’nai Torah Congregation, the largest conservative synagogue in Southeast Florida, announced today that Boca Raton residents Donna and Gerald Kramer have gifted – from the Kramer 2020 Charitable Trust – one the largest donations the synagogue has ever received. The gift was made in honor of Rabbi David Steinhardt, Senior Rabbi at B’nai Torah Congregation, who has held the position for more than two decades. Mr. & Mrs. Kramer direct the Kramer 2020 Charitable Trust, and have also established a second trust, for Jewish organizations in the Boston, MA region, which will go into effect later this year.

“The Kramers have been long time supporters and Ner Tamid members since 2013, and I am profoundly appreciative that they have chosen to honor me in such a significant way,” said Rabbi Steinhardt. “Their gift will help grow our synagogue’s foundation and allow for significant growth in the learning and programming we provide for future generations. The Kramers are all about giving and ultimately leaving a better world for those who come after them.”

The prestigious Ner Tamid Society recognizes donors like the Kramers who make sizable donations to demonstrate their commitment to creating a Jewish Legacy and perpetuating Jewish life from Generation to Generation. B’nai Torah Congregation is currently in the midst of future planning for the synagogue and this donation represents one of the most significant gifts in the synagogue’s history.

“We thank Mr. and Mrs. Kramer for their dedication to Jewish life and commitment to the long-term future of our synagogue,” said Ed Sopher, President of B’nai Torah Congregation. “This is the Kramer Charitable Trust’s first gift to our synagogue and we are eternally grateful for their incredible generosity.”

The Kramers are longtime supporters of Jewish institutions, where they acknowledge membership, interest, and financial support are waning. The second trust will be used to support three Boston area organizations: The Boston Synagogue, Temple Israel of Nantasket Beach, and the Jewish Cemetery Association of Massachusetts.

Mr. Kramer is the Managing Member of Extra Packaging LLC, which is a manufacturer and distributor of flexible packaging materials, including body bags, and employs about 80 people. The company is headquartered in Boca Raton and has locations in Peabody, MA and Eagle Pass, TX. Mrs. Kramer is the co-founder of the company and has served as Chair since its inception in 1998. On behalf of Extra Packaging LLC, the Kramers have donated PPE (personal protective equipment) valued in the mid-six figures to the Convoy of Hope. This is the second donation to this organization which responds to both domestic and international disasters, and these products will replenish its domestic supplies which were previously depleted for the crisis in Ukraine. The first one was in 2016 for Emergency Water Storage Bags sent to Haiti, along with tarp material via Hands on Tzedakah.

The Kramers are originally from Boston and have three children. Son, Bryan Kramer, has one child attending the Mirochnik Religious School at B’nai Torah, and manages the family business worldwide. Daughter, Rachel Kramer Theodorou of Watertown, MA, has three children and is a Professor at Brandeis University in Waltham. Daughter, Leah Kramer, has one child, and is an internet entrepreneur in Cambridge, MA. Both daughters are also published authors.

For those interested, a charitable gift annuity trust provides income to the donor and future support for beneficiary of the gift. For more information, please visit www.btcboca.org.

B’nai Torah Congregation is the largest conservative synagogue in Southeast Florida with over 1,300 membership families. It is a close-knit, multi-generational, modern, and egalitarian synagogue, which offers diverse services, programs of worship, learning, tzedakah, social action, and social activities. B’nai Torah Congregation creates a perfect outlet for arts, culture, and learning, and we are home to several schools of Jewish education. The synagogue, which offers a wide variety of volunteer opportunities that will enrich the synagogue experience, is a tremendous and vibrant center for tzedakah acts and projects that touch thousands of people. Learn more at https://btcboca.org.