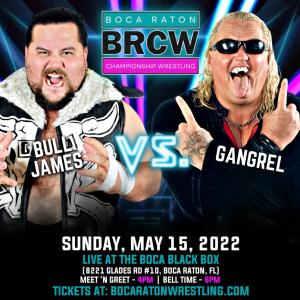 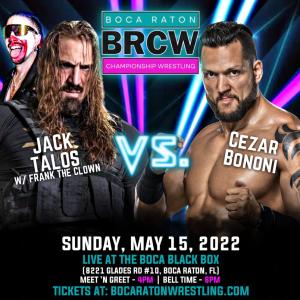 The Giant Jack Talos Stands 7 feet tall, and you can not teach that!

Known for its high-end glitz, glamour and luxury living, Boca Raton is a surprise choice for a new wresting territory, but company co-founder Neil Glazier thinks differently. “I’ve lived in many places and Boca is the greatest city in the country. Why not bring the greatest city the greatest entertainment? You may think of the beaches, country clubs and culture but Boca Raton is the perfect location for an audience looking to get loud, riled up and rowdy for some pro wrestling.”

As promotion has rolled out for the show, videos have launched featuring former NXT Creative Producer Ryan Katz as the voice of the company. This marks Katz’s return to independent pro wrestling since beginning work for WWE in June of 2013. “To say I’m excited would be an understatement, I’m pretty much ecstatic. The lineup is incredible, Neil and Matthew have assembled a great team, and I’m looking forward to entertaining the people at this Boca beatdown. It’s going to be fun, flashy and like any good wrestling show, unpredictable. Have you seen the championship belt?” A picture is available on the company’s Instagram at @BRCWFlorida featuring the BRCW’s Championship title belt complete with neon colors, palm trees and a style that can only be called Boca.

Taking place at the beautiful Boca Black Box, co-founder Matthew Maschler feels the community is craving this sort of entertainment. “I’ve been in Boca for years and I know the community well. Knowing I love wrestling, this is something that community leaders, shop owners and residents are always asking me about. The timing was right, the team came together, and this is something that just had to be done.”

This will be a night to remember. The start of a legacy and you must be in attendance to be a part of the history in the making. In the words of BRCW Commissioner Brutus “The Barber” Beefcake, “It’s going to be a blast!”

Tickets are available at www.BocaRatonWrestling.com.