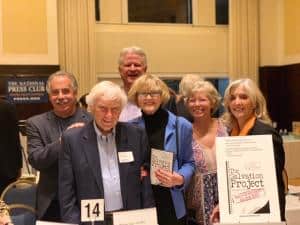 Browseabout Books is one of the nation’s top book stores. Both Joe and Jill Biden have launched books of their own at Browseabout and are frequent patrons.

In Rothstein’s "The Salvation Project," the protagonist is a charismatic woman running for re-election as president of the United States, unaware that a ruthless international conspiracy, with a killer agenda is prepared to do anything required to defeat her.

The "Salvation Project" was judged the best political thriller of 2020 by the prestigious Pacific Reviews award panel, which compares the novel to long-time political classics The "Manchurian Candidate" and Stephen King’s "The Dead Zone."

Pacific Reviews, in its critique says, “Rothstein takes high stakes political espionage to a very contemporary, credibly scary, and absolutely addictive level with this opus.” That praise is echoed by Publisher Weekly’s BookLife. “His ideas and his machinations– including the intricacies of the Project–are unusual and memorable."

Rothstein, a long-time summer resident of nearby Dewey Beach, is one of the nation’s foremost political strategists and media producers. His company has worked in more than 200 political campaigns for some of the most powerful and well-known figures in U.S. politics. He draws on that experience to write gripping political drama.

Rothstein’s debut novel, "The Latina President and the Conspiracy to Destroy Her," won honors at book festivals in Southern California, New England and London.

“For those involved in them, political campaigns are dramatic personal events,” says Rothstein. “Careers are made or lost. Marriages are created and destroyed. Friendships are formed that may last a lifetime. On one day, election day, you win or are defeated, and losing can happen even if your share of the vote is 49.9%. The extraordinary pressure on otherwise ordinary people is incredible. All of this is in real time, but my involvement in so many campaigns allows me to translate events into what I hope is absorbing fiction.”

Rothstein captures that drama in his novels. Midwest Reviews says of "The Salvation Project, "Be forewarned: there's a lot of juicy action to digest here…and just when it seems like a tidy ending will evolve, yet another unexpected twist emerges. "The Salvation Project" embraces elections, murder, and conspiracy at the highest levels of office and the heart."

Rothstein’s book signing is scheduled from 10 a.m. until noon Sunday, July 25. "The Salvation Project" is available from all on-line book sellers and through most book stores.