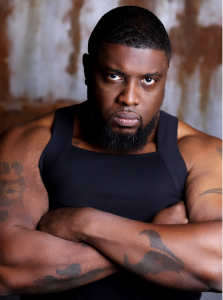 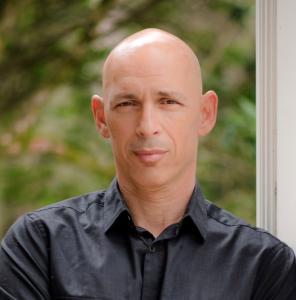 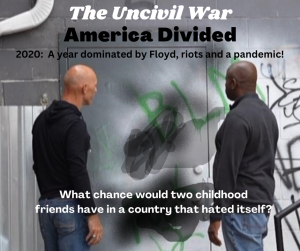 I loved his audition! He killed it! He was perfect for the part of Byron, Tom’s best friend, but we couldn’t hire him.

CLEARWATER, FLORIDA, USA, November 13, 2022 /EINPresswire.com/ — Booda had auditioned with David Siracusa, Executive Producer and lead actor “Tom”, and Andrew Huff, Director, for the upcoming movie, The Uncivil War – America Divided. The story follows the lives of two buddies, one white and one black, as they try to navigate the dangerous waters of the summer of 2020. Floyd, pandemic, riots, BLM and business closures dominated the news and threatened to tear apart friendships across the nation. The script dives into these treacherous topics with a reckless abandon.

In David’s words, “I needed a big personality. Someone who could take over a scene. And I found Booda!” Basically, a huge man with a dominant personality, whose massive frame fit his military background, but which did nothing to overshadow his incredibly infectious, lovable personality.

Still, as much as we wanted to, we couldn’t hire him. The reason was because one of the named actors attached to the movie at that time had a childhood friend that he desperately wanted for the part. So reluctantly, I had to inform Booda that we had to go a different direction.

His response was spot on. David hated even more that he couldn’t hire him after he received his reply.
Booda replied in an email, “I completely understand, but I would like to explain why this script meant so much to me. I’m an Army veteran who’s served with some of the most amazing people of diverse backgrounds, races, religions and beliefs. I feel that I have an organic connection with Byron’s character because I was raised in a low-income environment surrounded by people who looked, thought and acted just as Byron is described. Once I left that environment and educated myself, I was able to broaden my scope and see the world through a different lens. I now live in an upper middle-class neighborhood surrounded by neighbors who do not typically look like me or share my ideology. However, my experiences have enabled me to see both sides of an issue and provide unbiased opinions, or just listen with an understanding ear. As you can imagine this has not gone over well with some of my friends and family because they have very rigid opinions of the political atmosphere and the treatment of African Americans in this country.

During my audition my reader had to stop several times. She became visibly then emotionally upset as the audition progressed. It was at this moment that I realized how much I truly wanted to be part of this film. It illustrated just how powerful and impactful this subject is and how much we need to have this discussion. I also saw how this movie will force Americans to take a deeper look at themselves and ask, ‘Why are we so angry? Why are we so divided? What happened to our sense of decency and respect of differing opinions without it becoming so adversarial?’”

The second they parted ways with their initial named actor and his friend, David immediately reached out to Booda And he hasn’t regretted the decision for a single minute. Booda’s ad lib and improvisational skills on the set and relaxed nature have brought so much fun, complexity and life to the character that they couldn’t possibly imagine anyone else playing the part now.

Between takes Booda regales the cast and crew with stories of his military adventures, bodybuilding career, and fatherhood, among other things. As if this wasn’t enough, he’s also a phenomenal cook. Booda has proven that he was the absolute best choice to portray Byron and has shown everyone involved with this project just what an amazing man, and actor, he truly is. Watch for him in the theaters, because you are definitely going to be seeing him on the big screen. A lot!

Bronsonn “Booda” Taylor is currently living in Atlanta but travels frequently as he continues to pick up bigger and bigger acting jobs all over the US. Upcoming projects include a Lifetime Movie “Buried in Barstow”, For Us By Us (FUBU) TV shows “Broken Seeds” and “Heaux Phase”, on Tubi “Blood or Not,” “The Eye” and “Just in Time” as well as “Spilled Paint” which will potentially air on Hulu or Amazon Prime.

For more information about Booda or the film, please visit www.TheUncivilWarAmericaDivided.com or reach out to media contact, David Siracusa.