These are some of the experts and research that have weighed in on the facts and controveries regarding modern manufactured housing and its pottenial role in solving the affordable housing crisis. 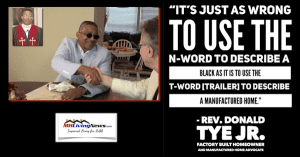 Rev. Donald Tye Jr was raised in a pre-HUD Code factory built home and raised his own family in such a home. Tye has advocated there is a need for more manufactured homes. 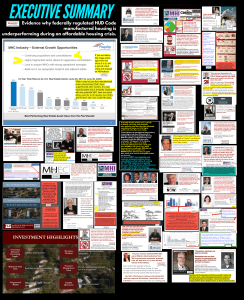 Minneapolis Federal Reserve Senior Researcher James Schmitz Jr and his fellow reseachers made the point that the methods of monopolists can be subtle and difficult to detect. Abraham Lincoln quipped that it is difficult for liars to keep lies straight over time.

Affordable housing is in crisis. Some 22 million Americans live in mobile/manufactured homes. NAR-Most of 111 million renters could own. Controveries explored.

MHI’s conduct in obfuscation judicious decision-making by [FHFA and HUD] constitutes a conspiracy to restrain trade under Section 1 of the Sherman Act…and should not be afforded Noerr protection.”
— Samuel "Sam" Strommen for Knudson Law legal research.

POINCIANA, FLORIDA, UNITED STATES, January 12, 2022 /EINPresswire.com/ — New and previous research explore the causes, cures, and controversies about the affordable housing crisis. Scholastica “Gay” Cororaton's study for the National Association of Realtors (NAR) demonstrated that most renters can afford the financed payments for a manufactured home. Recent and prior research indicate manufactured homes appreciate. An estimated 111 million live in rental housing. NAR’s Chief Economist Lawrence Yun, Ph.D., has said that the only solution to get escalating housing costs under control is for “builders to get really busy.” But conventional site builders can’t keep up. Additionally, Marketplace reported some 85 percent of site-builders are “throttling” construction. A new study published on MHLivingNews by LendingTree indicated that mobile and manufactured homes in most states are appreciating in value faster than conventional housing. Those are elements of today's U.S. housing market. Numbers of 21st century third-party researchers have debunked the chief concerns that housing seekers, homeowners, elected and appointed officials have about modern manufactured homes. So, why has manufactured housing been underperforming for over two decades?

On 9.7.2021 HUD researchers Pamela Blumenthal and Regina Gray said the causes and cures for the affordable housing crisis have been well known for 5 decades. Per Blumenthal and Gray, “Federally sponsored commissions, task forces, and councils under both Democratic and Republican administrations have examined the effects of land use regulations on affordable housing for more than 50 years. Numerous studies find land use regulations that limit the number of new units that can be built or impose significant costs on development through fees and long approval processes drive up housing costs.”

Former HUD Secretary Ben Carson said on 5.7.2019 HUD was in position to usher in a "new era of cooperation and collaboration between our Department and the manufactured housing industry." Carson said “This is not just a housing crisis – it has a human face. Homes are at the heart of building strong families, strong communities, and ultimately, a strong country.” Citing manufactured home construction costs about half of conventional housing, Carson said: “dramatic cost savings in construction enable responsible citizens to secure housing that may be considerably less expensive than renting or purchasing a site-built home.”

Manufactured home production centers can be expanded or built in roughly 6 to 12 months. Clayton Homes CEO Kevin Clayton said on behalf of the Manufactured Housing Institute (MHI) that hundreds of factories and thousands of retailers closed since 2005. What explains the lack of progress in manufactured housing acceptance?

Researchers point to several factors. Some point toward controversies in and beyond the manufactured home industry. To frame the discussion, generically, Senators Elizabeth Warren, Bernie Sanders and former President Donald Trump have said “the system is rigged.” Seriously?

James A. “Jim” Schmitz Jr and fellow researchers said that HUD, the NAHB, and builders are using subtle “sabotaging monopoly” tactics to subvert manufactured housing. ProMarket and research published by the Minneapolis Federal Reserve claim such “sabotage” has been occurring for decades.

Samuel “Sam” Strommen for Knudson Law provided research published by MHLivingNews. It points the finger at specific brands, including Clayton Homes (BRK), Skyline Champion (SKY), and Cavco Industries (CVCO). Strommen: “submits…MHI’s conduct in obfuscation judicious decision-making by the [FHFA and HUD] constitutes a conspiracy to restrain trade under Section 1 of the Sherman Act, and by virtue of the misrepresentative nature of the conduct, should not be afforded Noerr protection.”

Strommen claims evidence of “felony” monopolization that appear to violate the Sherman Act and RICO laws creating a “Rube Goldberg Machine of Human Suffering.” “The manufactured home…for tens of millions of Americans today—a great many of whom hail from the lowest socioeconomic stratum, it is a way of life, the only affordable living situation available, and the only means of achieving home ownership.”

Prosperity Now’s Doug Ryan told AmericanBanker its “Time to End the Monopoly Over Manufactured Housing.” “For too long we have ignored a segment of our housing system that offers an affordable path to homeownership: manufactured housing.” Ryan claimed MHI, acting on behalf of Clayton Homes’ affiliated lending units, was “unwilling to criticize” Fannie Mae, Freddie Mac, and the FHFA for excluding “chattel loans” – personal property, home only lending that often finance manufactured homes – from the Duty to Serve (DTS) mandate passed by Congress in 2008.

Lesli Gooch, on behalf of MHI, denied Ryan’s charges. But thus far, MHI CEO Gooch, MHI’s board leaders and attorneys have not yet responded publicly to pages of footnoted allegations detailed by Strommen.

Prior to the COVID19 pandemic declaration, an assistant state attorney general examined evidence similar to Strommen’s. She told MHProNews that there are indications of antitrust and other state/federal law violations.

In a letter to the CFPB, Representatives Maxine Waters, Emanuel Cleaver, Keith Ellison, and Mike Capuano said: “Clayton is the nation’s largest manufactured housing company and has a “near monopolistic” grip on lending to minority borrowers seeking financing for manufactured housing…”

The Nation reported that the “Dirty Secret Behind Warren Buffett’s Billions” was a method Buffett called “the moat.”

Robin Harding in the Financial Times said, “the Buffett definition of good management [for Berkshire Hathaway owned companies] is therefor clear. If you have effective competitors, you are doing it wrong.”

Kevin Clayton in a video interview/transcript found on MHLivingNews said: “Warren…paints an image…about this moat, this competitive moat, and our job [as Berkshire managers] is very simple and we share this…Deepen and widen your moat to keep out competition.” “Some of our competitors do a good job, but our plans are to make that difficult for them.”

These concerns have been raised directly to the FHFA in a document published on 3.25.2021 linked here.

Beyond the Manufactured Housing Association for Regulatory Reform (MHARR), MHProNews, and MHLivingNews, Forbes, GuruFocus, and the Seattle Times have detailed such concerns. In a viral video, HBO's Last Week Tonight with John Oliver ripped MHI member brands by name, including Clayton and Frank Rolfe. These facts beg several questions, which boil down to this. When will public officials probe and legally act on these troubling issues? ##