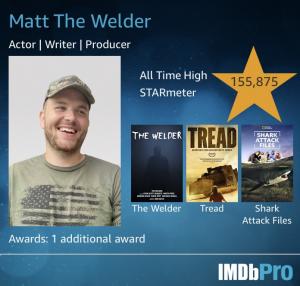 Controversy is no adversary to this beloved Florida Comedian

Matt The Welder has released his first comedy albums,which has been certified gold by the RIAA for shipments of 500,000 copies and in addition has starred in his own “Nothing Left To Lose” Comedy Tour. (
Matthew Taylor was born in Tampa, Florida on August 28, 1989, and raised on a farm in nearby Odessa, FL. He is the son of John and Kathleen Taylor.

Matt graduated from Sickles High School in Tampa, FL in 2008. He went to welding school and became a master welder.

He has recently taken the internet by storm gathering followers from all over the US with his controversial videos and posts.

Taylor and his wife Season married in 2018. They have a son, Baden and a daughter, Colsyn. Season has 3 other children which Matt is a stepfather to. Nevaeh, Saia, and Hunter. The Taylor family resides in Plant City, FL on a farm