Steven Gurowitz, of Interiors by Steven G, with Tamela and David Mann at Embrace benefit concert. 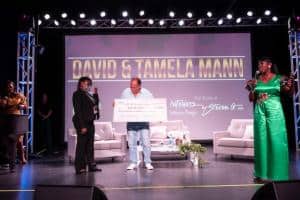 “We have an amazing following, a sophisticated, mature audience that appreciates the dinner club feel of these shows, embraces the evening and leaves feeling good about being there.” .”
— Embrace Girls Founder and CEO Velma Lawrence

There was the sold-out audience at the August 8 event, who not only got to have dinner, ask questions, take pictures, and mingle with the stars of Tyler Perry’s “Meet the Browns,” but also heard Tamela Mann sing several of her #1 Billboard magazine gospel hits, including “Take me to the King,” “Ups and Downs,” and her new release, “Help Me."
The hundred senior citizens from Miami Gardens and Dania Beach given free concert tickets by Dania Beach Mayor Tamara James and Miami Gardens Mayor Rodney Harris were also winners, as was the city of Dania Beach.

“It was amazing because there are not a lot of times when we have that kind of access to celebrities my community loves,” Mayor James said. “I am so grateful to the Casino and the Embrace Girls Foundation for partnering with Interiors by Steven G., HOT-105, 99JAMZ and LOCAL 10 to provide our residents and our communities with such a beautiful event.

“I’m very appreciative of Embrace Girls Foundation for choosing Dania Beach,” James said. “They’re bringing a lot of people into our city who probably have never gone to our casino. It is definitely a win-win for our city.
“It was not just a concert; it was an experience.”

“Tamela said she was the only one of fourteen children in her family to get a high school diploma,” Thomas said. “She started crying when she said by the time she achieved some career success her mother was suffering from dementia, and she couldn’t share it with her. I had everyone in the audience say her mother’s name, to recognize her.

“All I have heard from everyone is that it was an amazing show,” Thomas said. “Most people want a backstage pass to get to meet stars. We gave them an onstage pass.”

The “Intimate Evening with David and Tamela Mann” benefited the Embrace Girls Foundation Inc., a non-profit that provides uplifting, girl-centric programming for hundreds of girls in several public and private elementary and middle schools in Miami/Dade and Broward counties.

It was the second Embrace Girls Foundation benefit concert to sell out the Casino at Dania Beach this summer. Soul Singer Jeffrey Osborne’s June 27th “Intimate Evening” also sold-out weeks before the show.

Embrace Girls Foundation Founder and CEO Velma Lawrence said the ‘intimate evening’ concerts have proven to be a winning formula.

“We have an amazing following, a sophisticated, mature audience that appreciates the dinner club feel of these shows, embraces the evening and leaves feeling good about being there,” she said. “That’s our goal. With the pandemic and the stressful year we have had, when you can give people a chance to give their minds a rest and just enjoy good music, all for a good cause, that is a priceless moment.

“We are already getting calls about our Dec. 5 holiday show, featuring Regina Bell and the Manhattans.”
Three of the evening’s winners – Gurowitz, president of the luxury interior design firm ‘Interiors by Steven G’ and sponsor of the Mann and Osborne concerts, and Lachanze Williams and her daughter, Makaela Odom – also made Embrace history.

Makaela, a Miami Northwestern Senior High School nursing student, was awarded Embrace’s first Dorothy Gurowitz Academic Scholarship Award, named for Gurowitz’s 91-year-old mother – an award her son did not know existed.
“I was up on stage when they announced the scholarship, and they were holding up this big cardboard check to give to the winner, and it was all I could do to keep myself composed,” Gurowitz said. “My mom is in the hospital, so I got a lot of happiness from that moment.

“The event was amazing,” Gurowitz continued. “I got an opportunity to meet a lot of people I would have never met if not for Velma and Embrace Girls. Tamela just launched a new album, and the day before was David’s birthday. They already told Velma they want to come back, as does everybody.

“Everybody wants to be with the winner.”

Williams and Odom were double winners – when Lawrence announced the award, David Mann said they would match it – and sent Williams $1500 on Cash App before the evening ended.

Williams, who has volunteered with Embrace for three years, said Makaela did community service with the group, including helping to run Zoom online meetings during the pandemic. She said the $3000 will help cover the cost of clinicals and other expenses Makaela needs to complete Miami Dade College’s nursing program.

“I told her the other day not to worry about the money, we would find it,” Williams said. “I just want to thank Embrace Girls and Interiors by Steven G for making this possible.”

There was one more happy winner at the Mann’s show – the concert guest who used the $10 complimentary Free Play ticket the Casino gave with each ticket and won $4000.

“I would be remiss if I did not thank the Embrace Team, our sponsors and the audience for supporting these series of shows, as most of the people at the Mann benefit attended the Osborne show,” Lawrence said. “How special is that?"
You can see pictures and videos from the Osborne and Mann shows at http://www.embracegirlpower.org/gallery.html.

For more information about Embrace Girls programs or to make a donation, call 877-466-4769, or go to the website, www.embracegirlpower.org.