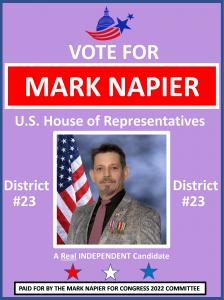 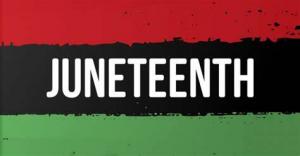 Since the Civil War, 157 years has passed with Blacks and Whites finding common ground to eradicate the roots of racism, but more needs done targeting poverty.

…they {Black community] do get the short end of the stick in some areas like education, judicial and the economic environment that impacts living standards, let alone self-worth and self-esteem.”
— Mark Napier

FORT LAUDERDALE, FLORIDA, UNITED STATES, June 13, 2022 /EINPresswire.com/ — Mark Napier an Independent Congressional and LGBTQ+ Candidate for Florida District 23 (formerly District 22) is seeking his first bid for Congress this 8 November 2022. Napier anticipates being qualified for the ballot on 13 June. Napier says he has worked hard as a low-income candidate to achieve what few from the impoverish ranks could ever achieve or dream. “Often times it is the wealthy or well-to-do who are permitted the privilege to run for office.”

Napier seeks to follow in the footsteps of Shirley Chisholm who in 1972 was the first Black woman to win a seat in Congress to represent what Napier refers to as the ‘Discarded and Forgotten’–the low-income, impoverished and homeless. In recognition and celebration of Juneteenth…“I am honored to be running for U.S. House of Representatives in Florida this fall. The Black communities are hardest hit by poverty as far as ethnicities go and the 'Powers that Be' in Washington are more about ‘Slap and Tickle Politics’ than doing the job they were elected to. They are out of touch with the people at the bottom. It’s time for Change!"

“Juneteenth” [June 19] is celebrated for the emancipation of enslaved people that occurred on 1 January 1863 prior to the end of the Civil War in April 1865. However, word of the proclamation took 2 ½ years to make it to Texas on 19 June 1865. Napier says…”I speak from the heart when I say this…157 years has passed with Blacks and Whites continuing to find common ground and make great strides in eradicating the roots of racism. Unfortunately, there are elements who ‘profit’ [financially and politically] from keeping the flames burning for division rather than unity using ‘Kardashian theatrics’ seen daily across the nation and in Washington.”

Napier reflected on his own experience with racism when he dated his very first girlfriend who was Black in 1985 and she continues to be his 'soul mate' to this day. “We were trend setters apparently as the first interracial couple of White male and Black female on campus. Before we knew it three months or so passed and five other couples were in lockstep with us: White males with Black females at their sides.”

Napier experienced racial discrimination and harassment on a number of occasions throughout his life while dating interracially in the Army ROTC program, when he later got married in the mid-90s and at work with the CIA. Napier says he has been in interracial relationships off and on for better part of nearly 40 years and has no regrets to include the LGBTQ+ community. “I feel a close bond to the Black community, and they do get the short end of the stick in some areas like education, judicial and the economic environment that impacts living standards, let alone self-worth and self-esteem.”

Napier's autobiography and story depicts how he was left chronically homeless on the streets for five years laying the foundation for his pursuit to run for office. In 2015, with perseverance and fortitude Napier pulled himself off the streets and now is running for office. Napier devoted 20 years to the Central Intelligence Agency, including nearly four years in the combat zones of Iraq and Afghanistan. Napier also devoted 26 years to the U.S. Army National Guard and Reserves that included a couple of mobilization following Desert Storm and 9/11 attacks.

Napier says his campaign understands the fear of being left homeless during these high inflationary and economic times. During the last Great Recession in 2008, 1.6 million people were left on the streets and 61% was due to foreclosures, according to Policyadvice.net. “Now is a time for change in our political leadership…and it takes only ‘ONE’ to be a Force Multiplier! 'ONE' being Optimistic, Neighborly and Experienced to get the job done in Congress!” To date, Napier continues to demonstrate that he is an Army of ‘ONE.’

Napier reflects…“This is why I am advocating for the ‘Discarded and Forgotten’ in my campaign. A ‘Hand-Up’ approach for greater access to services is needed, including more affordable housing. However, strong advocacy is needed for Civil Rights and Liberties that include judicial reform and more law enforcement training too.” Napier notes more needs to be done to raise the standard of education in the community, not lower the expectations… “A Harvard style educational teaching system needs to be employed with children at an early age than passing them off unprepared.”

Napier says his collective efforts are intended to facilitate lifting the community out of poverty and one initiative Napier would like to pursue is exploiting Economic Empowerment Hub-Zones that give Black owned businesses located in low-income neighborhoods preferential support from County, State and Federal resources when possible until the neighborhoods rebound. Napier intends to work closely with the Black Chamber of Commerce at the local, state and national levels for input and guidance.

If elected, Napier intends to place satellite offices in Wilton Manors and other impoverished and Middle-Class areas to facilitate greater access for the constituents who really need advocacy. Currently, Congressman Ted Deutch's field offices are located in the “up-scaled ivory towers” scattered throughout the District in wealthier neighborhoods like Las Olas. Napier also intends to seek membership in the Congressional Black Caucus to represent his constituents.

In closing, Napier wishes to extend salutations to the Black community and to many of his friends in the community for a safe celebration and reflection of the true spirit of the national holiday.