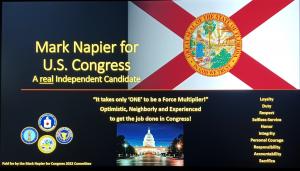 Mark Napier for Congress Slogan, Values and Experience with CIA and U.S. Army

It took Perseverance and Fortitude to Recover from Chronic Homelessness for 5 years. Now I am Seeking Office to Represent the Discarded and Forgotten.

It only takes 'ONE' to be a Force Multiplier. 'ONE' being Optimistic, Neighborly and Experienced to get the job done in Congress.”
— Mark Napier

FORT LAUDERDALE, FLORIDA, UNITED STATES, May 18, 2022 /EINPresswire.com/ — Mark Napier, a self-described 'real' Independent Candidate, is formally announcing his bid for Congressman Ted Deutch's seat in Florida District 22 for the U.S. House of Representatives. Napier, who filed on 5 February 2022 with the Federal Election Commission. Napier is a former Central Intelligence Agency officer who was wrongfully terminated in 2009, during the Great Recession for being a Whistleblower who reported in official channels the mishandling of an investigation by Iraq Station officials involving Child Pornography where he served for three months. Napier would eventually be left homeless on the streets for five years. According to Napier, it took "perseverance and fortitude to pull myself off the streets in 2015, and now I am running for office."

Napier was in the service of the Agency for a total of 20 years as a staff employee and as independent contractor for the last four years. After the initial three-month deployment to Iraq, Napier's follow-on assignment for 3 1/2 years was to Afghanistan. Napier held the prestigious position of Deputy Chief of [CIA] Base of Bagram Airbase for 17 months from 2005 to 2007, before being deployed an additional two plus years along the Afghan/Pak border conducting Counterterrorism Operations until early 2009.

Napier devoted 26 years to the U.S. Army National Guard, Reserves and Active Duty (mobilized)—though not fully credited, due to work conflicts with CIA and the loss of his personnel records by the Army–four times. Napier graduated from various programs such as Military Intelligence, Military Police, Military Support to Civil Authorities, a MS degree in International Management and the Federal Law Enforcement Training Center to name but a few.

Napier has been registered as an Independent voter since the age of 18. "I look at the person, not the Party when voting. …..I know I would be a great advocate and voice for the LGBTQ+, Black, Asian, Hispanic and Jewish communities, in addition to the Dreamers of the middle and low income, impoverish, and homeless. Special emphasis needs placed, however, on the elderly, the disabled, the children [in foster care] and Veterans too."

Napier's campaign slogan to carry the fight to Washington is direct: "It only takes 'ONE' to be a Force Multiplier. 'ONE' being Optimistic, Neighborly and Experienced to get the job done in Congress. Not Slap and Tickle or Peekaboo Politics!…I am Not Bought, Not Biased, and Not Filtered!"