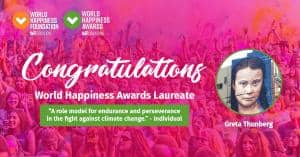 We are looking for social good entrepreneurs and institutions that know what it takes to bring kindness, compassion, hope, and abundance to societies worldwide.

When we create opportunities for underserved communities we are contributing to sustainable and healthy societies. ”
— Luis Gallardo, Founder & President – World Happiness Foundation

MIAMI, FLORIDA, UNITED STATES, October 28, 2021 /EINPresswire.com/ — This year, the World Happiness Awards is once again ready and eager to recognize and celebrate organizations and individuals that are realizing a world with freedom, consciousness, and happiness for all! Our World Happiness Award Laureate in the Category of Social Impact (Individual) is Greta Thunberg.

Greta Thunberg is only 18 years old, but already she has become a role model for endurance and perseverance in the fight against climate change. It all started in 2018, when Greta was 15, with a sign painted in black letters that read ‘School strike for Climate.’ Every Friday, she would skip school and protest in front of the Swedish Parliament in order to pressure the government to meet carbon emissions targets. Sometimes people would join her, and sometimes it was only her in front of the wall, figurative and literal.

However, her solo campaign had a global effect, inspiring thousands of people worldwide to raise their voices and organize their own strikes. By the end of that year, over 20,000 students joined her skipping school to protest against climate change. A year later, she was nominated for the Nobel Peace Prize for climate activism.

This was just the beginning of her global activism. In 2019, Greta attended a UN climate conference in New York where she delivered her famous speech, angrily telling world leaders that they were not doing enough. “You say you love your children above all else, and yet you are stealing their future in front of their very eyes,” Thunberg said at the UN Climate Action Summit, urging world leaders to take climate threats seriously.

Thunberg was also declared Time magazine’s person of the year and was nominated two more times for the Nobel Peace Prize (2019-2021). She has met with world leaders, speaking in front of massive crowds, and became the icon of a generation. Greta has Asperger syndrome, one of the autism spectrum disorders, which she sees as a gift. To her, being different can be a superpower. “If I were like everyone else, I would have continued on and not seen this crisis,” she told the Times.

Most importantly, her actions are consistent with her words. She speaks truthfully and unapologetically about the threat of climate change regardless if she speaks with her peers or world leaders. Greta is vegan, she upcycles, doesn’t buy clothes, and she also gave up flying. She called those who were willing to act and chastised those who were not. According to a survey done by Amnesty International, her presence has become a sign of youth’s anger worldwide.Greta Thunberg’s impact is undeniable and inspirational to millions of people all around the world. She has inspired young people to pay attention to climate and environmental issues and started a climate strike movement that shows the power that lies in all of us when we fiercely dedicate ourselves to positive change. This is why Greta Thunberg is one of our laureates for the 2021 World Happiness Awards!

The objective of the 2021 Worl Happiness Awards is to recognize individuals and communities realizing a world with freedom, consciousness, and happiness for all. In a time of social media and competing headlines, drawing attention to such an important issue is a vital part of creating powerful momentum in confronting the climate crisis is more than commendable. This is our way of showing our support and admiration.

Burning fossil fuels, clearing forests, plowing soils, and forming landfills are just some of the harmful human activities that emit gasses into the Earth’s atmosphere. Most of these greenhouse gasses stay airborne, but not all. Nature’s processes, especially photosynthesis, bring the excess back to plants, soil, and the sea. These ‘sinks’ are nature’s reservoirs for absorbing and storing carbon. While most emissions stay in the atmosphere, significant portions are quickly removed by plants or taken up by oceans. What this planet needs, more than anything else, is to reach drawdown.

Drawdown is the point in the future when levels of greenhouse gasses in the Earth’s atmosphere will stop going up and steadily decline. This is the critical turning point for life on Earth when humankind can truly stop further climate change and avert dangerous global warming. This is also the core mission of the Project Drawdown.

Project Drawdown is a nonprofit organization that seeks to help the world reach this goal. It was founded by Paul Hawken and climate activist Amanda Joy Ravenhill. Paul Hawken is an environmentalist, entrepreneur, author, and passionate activist, who has been active since 1965 when he worked on the preparation for the Selma to Montgomery marches. Paul has been awarded six honorary doctorates and has received the Green Cross Millennium Award for Individual Environmental Leadership. He has given hundreds of talks, written nine books published in over 50 countries in 30 languages, and founded several companies, including the Project Drawdown. Paul has served on the board of several environmental organizations, including Trust for Public Land, Point Foundation, and Center for Plant Conservation. As he says: ‘We practiced degeneration as a species and it brought us to the threshold of an unimaginable crisis. To reverse global warming, we need to reverse global degeneration.’

Since the 2017 publication of the New York Times bestseller ‘Drawdown: The Most Comprehensive Plan Ever Proposed to Reverse Global Warming,’ which he wrote, this inspiring organization has emerged as a leading source of information and insight about climate solutions. Project Rundown provides a rich database of solutions to reverse global warming and its severe consequences. These solutions offer real-world applications as well as communication and educational opportunities to successfully continue toward drawdown. The solutions, first mentioned in the book, are divided into eight sectors: built environment, electricity generation, food, land use, materials and waste, oceans, transportation, and women & girls.

Every solution is measured and modeled to determine its carbon impact through 2050, society’s total net cost, and lifetime savings. They conduct continuous review and analysis of climate solutions that can reduce the excess of greenhouse gasses in Earth’s atmosphere. Their work has shown that the world can reach drawdown by mid-century if we all make the best use of these solutions. As they say: ‘Although more solutions are needed and emerging, there is still no reason or time to wait on innovation. Now is better than ever.’

We can’t think of a more inspiring environmental nonprofit organization worth celebrating than Project Drawdown. That is why we are happy to see them as one of the 2021 World Happiness Awards Laureates. Join us in our celebration of people and communities, making this planet a better place for all!