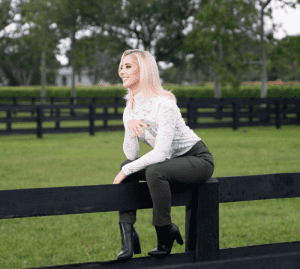 NORTH PALM BEACH, FLORIDA, USA, April 26, 2022 /EINPresswire.com/ — Hailey Feldman brought the audience to tears of laughter as she delivered her comedic lines in Murder by Midnight, a play by Jeff Goode. The April 22, 2022, opening night was the debut leading acting role for Hailey Feldman.

Known regionally as a Fashion, Beauty, and Lifestyle Influencer with a following on Instagram, an online collection at LIKEtoKNOW.it and her own website and blog, Ms. Feldman has expanded her career into acting and the performing arts. Hailey Feldman landed her first leading role in one of a series of nine 10-minute plays on stage at the Palm Beach Institute for the Entertainment Arts. This is the second role Ms. Feldman has acted in this year. In March, she played a radio broadcaster in the play, Radio Ridiculous.

In playing the lead role of the femme fetale in a play directed by Avery Sommers and produced by Donna M. Carbone, Ms. Feldman showed her range as an actress in this leading role debut performance. Playing off the lines of co-star Roger Smith, Hailey Feldman brought her character to life, displaying grace and professionalism as she switched gears from comedy to drama in this unique role.

Hailey Feldman who was well received in this debut lead role, showed the poise and ability associated with more seasoned performers. After feeling the energy, acceptance, and admiration of the audience, Ms. Feldman commented, “I am in love with performing on stage. It is the most exhilarating and exciting feeling. I hope to continue to get roles on stage, but my goal is to be in front of the camera in television and film. This taste of experience has fed my confidence to pursue more auditions and acting assignments. I will be dedicating more time in the pursuit of my goal of a career in the entertainment industry.”

Tickets are available for the final performances of the thematic innovative production of nine separate 10-minute plays under the title Murder and Other Ways to Die. Weekend performances at the Palm Beach Institute for the Entertainment Arts are priced at $30 per ticket and continue through May 1. The venue is located at 115 US Highway One, North Palm Beach, Florida 33408.

To see the rising acting talent in Hailey Feldman, along with a host of other gifted theatrical actors, directors, and producers call (561) 743-9955 or email pbinstituteentertainmentarts@gmail.com for ticket sales.

As Hailey Feldman wraps up her debut performances in Murder by Midnight, she will be on the audition trail for more acting experiences. In the meantime, she will continue to engage with followers on her website and blog, as well as on Instagram and on other social media.