The home in the photo shown is one of several illustrations of “half priced new homes” which can be produced with or without a garage, depending on a homebuyers budget. 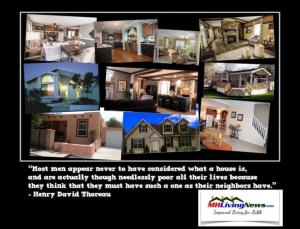 Each home is an example of new ‘half priced homes’ that include consumer protection, federal and state oversight, third-party inspections and more. See the new op-ed on the TampaFP. Click image to see a larger size. Escape or back key to return to this page.

If big business closes the door on the little guy with a new idea, we're not only closing the door on progress…we're sabotaging everything…we fought for! Everything that the country stands for!!”
— Preston Tucker, from Tucker: The Man and His Dream movie.

TAMPA, FLORIDA, UNITED STATES , February 18, 2022 /EINPresswire.com/ — The affordable housing crisis is a big deal for millions, but there is a surprising and overlooked solution. That housing solution is explored in a newly released op-ed in the Tampa Free Press provided by MHLivingNews. ‘If something sounds too good to be true, perhaps it’s not true.’ That is a common reaction to anything that appears to be new, different, promising, and hopefully honest. But past scams have made some consumers understandably skittish when it comes to possible good news that sounds 'too good.' Habits and human nature are among the factors that come into focus when a potentially groundbreaking change comes to market. Thus, skepticism is natural when a claim such as “half priced new homes” occurs. Scam warnings appear on Craigslist and other sites, precisely due to ‘it sounds too good to be true’ concerns. Thus, the fact- and evidence-based TampaFP op-ed illustrates, half-priced new homes are a viable solution for many in the affordable housing crisis. They are already proven and not some imaginary notion or scam.

Who says? The Washington Post. USA Today. The Urban Institute in several published research reports. Plus third-party studies conducted by professionals at the National Association of Realtors (NAR), Walden University, federal government, some states, and beyond. Several of those are specifically referenced in the new op-ed.

The featured image shown herein is the same as the one on the TampaFP. These whimsically, but demonstrably accurately described 'half-priced new homes' are the real deal, not some scam, myth, or fantasy.

According to the evidence-based article, which cites its sources for the benefit of others looking for a good alternative home option that may be home shopping. The information is also useful for those who are researching the affordable housing crisis. The column includes the following points and topics.

• “Half Price Homes” – New, Federally Certified, 3rd Party Inspected, Consumer Protection – in Affordable Housing Crisis, How can this Miss?
• “those first 17 words are demonstrably 100% accurate.”
• “This column includes research [that supports or proves the op-ed claims] from the National Association of Realtors (NAR) and Walden University.”
• “Administrations under both major parties at the state and federal level have discussed various housing plans for decades. A popular definition of insanity is doing the same thing over and over again and expecting different results.”

As a comparison in stark contrast to half-priced homes, a series of messages today to MHLivingNews from an alternative permanent housing producer said that their container houses range from $125 to $400 per square foot. Meaning, that container housing producer housing would be similar to or significantly higher than tract style conventional site built or ‘stick built’ housing. By contrast, building a 'half-priced home,' per the U.S. Census Bureau and HUD, truly is on average – half the price of new conventional housing construction.

There are several kinds of typical or what could be called alternative housing systems available. Among them are the following.

Those housing options are included here and/or in the report, analysis and commentary found on the ground-breaking insights in the Tampa Free Press op-ed.

The fresh "half-priced new homes" op-ed comes in the wake of a related topic linked below.

As the article by MHLivingNews suggests by analogy are lessons learned from the hit movie, Tucker. The once famous Tucker Torpedo auto caused an uproar. Some loved it, but competitors hated "The Tucker." Competitors of new and exciting developments often want to undermine that new idea.

That noted, the Tampa Free Press column also explores how realtors and conventional builders are embracing this instead of fighting it. See the video interview with a realtor whose husband is a conventional custom builder.

With the affordable housing crisis causing serious stress to millions of Americans, the op-ed offers consumers, media, researchers, public officials and others with an introduction to several controversies, good news, and rapidly actionable solutions.

Videos, illustrations, quotable quotes, and research data are provided in the fact-packed column. That and more are all found at this link here.