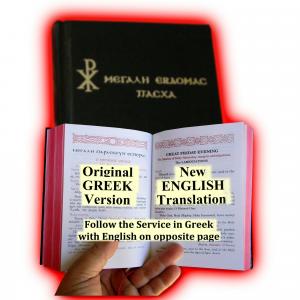 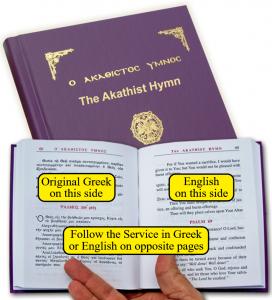 Akathist Hymn in Greek and English by Fr. George Papadeas

The Holy-Week-Easter book in Greek and English by Father George Papadeas, the very first American-Born Greek Priest, is distinguished as the “Gold Standard” in Greek Churches for almost 60 years.”
— Elias Papadeas

Original Greek text with the Modern English Translation on opposing pages. All paragraphs are arranged to correspond to both Languages, making it Easy To Follow the Services in either language. The body text is in black, with the narratives appearing in red. User Comments over the years have always been favorable.

as the “Gold Standard” in Greek Churches for almost 60 years.

The Official Newsletter of the Retired Greek Orthodox Clergy of America stated this book saved Holy Week for our Orthodox Churches in America.

The Greek Orthodox Church in America functions as much more than a religious institution, as its focal point in the lives of the millions of Greek immigrants and their descendants for over 100 years. The church became the most important Greek American institution in shaping the identity of Greeks in the United States.

Greek-language schools and encouraging local parishes to engage in cultural and social activities, like the ever popular and growing “Greek Festivals” nationwide, introducing every ethnicity to partake in the greek customs and foods.

digs into these traditional activities

Greek language in the Sunday liturgy demonstrates a rich biography of the church as Greek Orthodoxy remains the connection between the Old World and the New, both Greek and American.