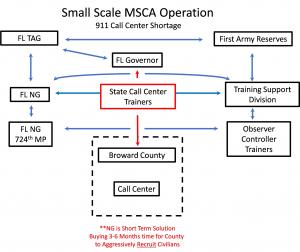 It's certainly not the time for Kardashian theatrics either. Accept ownership and take action to mitigate the problem now and restore the people's faith in their elected officials.”
— Mark Napier

FORT LAUDERDALE, FLORIDA, UNITED STATES, May 23, 2022 /EINPresswire.com/ — Mark Napier, an Independent Candidate for outgoing Florida Congressman Ted Deutch’s seat, offers up a proposal for a Military Support to Civil Authorities (MSCA) Operations as an immediate, short-term viable solution for Broward County’s 911 Call Center that is hemorrhaging for First Aid. Napier’s suggestion is intended to buy time for the county until civilian recruits can be hired full-time. Napier attended the Broward County Commissioners’ Meeting and Board Workshop that was held on 10 May that was addressed as Item Number 51.

Napier says… “I wanted to begin first to relay a few stories recently conveyed to me by associates on how 911 Emergency and Non-Emergency calls were going unanswered." Unfortunately, Napier says he was not afforded an opportunity to engage the forum. Nonetheless, Napier sat for two hours in attendance listening contently at the Commissioners' meeting; following up on the remainder of the meeting posted on YouTube https://mail.google.com/mail/u/1/#inbox/KtbxLrjhzfKmgCzdMGDbnBFDzQhHfPVlmL?projector=1; [Video Time Stamp: 4:39:32]. Only long-term courses of actions to reinforce the 911 Call Center were addressed.

Napier reports in preparation for the meeting he had conducted open-source internet research that indicate initial concerns for the 911 Call Center were addressed at least 28 times by the local media of which 19 of those reports were from the last 18 months. According to a press release in 2012: "Broward County Politicking over 911 Emergency System" the problems were foreseen and recognized 20 years ago in 2002. https://activerain.com/blogsview/3346767/broward-county-politicking-over-911-emergency-system

Broward County Mayor Michael Udine, during his introduction of 'Item Number 51' that he referenced as the BSO Dispatch Issue, “The system is not working” … “There’s got to be a better way to do this,” per the 10 May 2022, Sun Sentinel article https://www.sun-sentinel.com/local/broward/fl-ne-sheriff-budget-broward-county-20220510-not4hd2bnvhghdxhknb7tjig5y-story.html. However, Napier points out that… "It's certainly not the time for Kardashian theatrics either. Accept ownership and take action to mitigate the problem now and restore the people's faith in their elected officials."

Commissioner Mark Bogen briefly noted a hostile work environment existed that was driving employees out from the Call Center, according to exit interviews [https://mail.google.com/mail/u/1/#inbox/KtbxLrjhzfKmgCzdMGDbnBFDzQhHfPVlmL?projector=1; [Video Time Stamp: 5:28:39]. Poor management was first openly reported by the Daily Dispatch in 2016 in which a consultant reported…“the sheriff's office, the county and the city police and fire chiefs–don't trust one another. Employee morale is rock bottom. Technology is flawed.” https://www.dailydispatch.com/StateNews/FL/2016/August/29/Consultant.Broward.911.system.not.as.bad.as.people.think.aspx

According to the Broward Sheriff Office (BSO)'s estimates, only 5% of the applicants make it through the rigorous process https://mail.google.com/mail/u/1/#inbox/KtbxLrjhzfKmgCzdMGDbnBFDzQhHfPVlmL?projector=1; [Video Time Stamp: 5:13:23]. So, in the interim the public must prepare for the worst. That is why Napier's MSCA Operation proposal may be the ‘real’ short-term solution to holding down the fort, until the BSO can bring the Call Center up to speed, if the proposed initial tranche of $4.75 million is approved on 24 May.

“Dreaming the Dream,” Napier would propose a small scale MSCA operation to help sustain the Call Center operations with the civilians serving as the heavy lifters overseeing and serving in the “right-seat-ride” mode. The civilians would mentor, provide oversight and guidance to the nearly 200-300 soldiers rotating through. With overlap, the soldiers could serve for 60-90 days or more mobilizations. The county would need to contact Florida Governor Ron DeSantis to tap The Adjutant General of Florida who would identify troops in SOFLO. The types of forces to be identified could be Military Police or Intelligence units that hold security clearances.

Napier reports that Florida’s TAG would also simultaneously coordinate with First Army to direct its Training Divisions to step forward to oversee unit mobilizations, provide training and coordinate with Florida’s own emergency call center trainers perhaps from the Division of Emergency Preparedness and Community Support, Napier conjects. A condensed course could be conducted in perhaps two weeks. However, Devil is in the details between what and where Broward County Call Center needs to really focus its attention to meet the basic standards. Again, the troops are not intended to go through the full scope of a month plus training. The troops are there to take care of the immediate needs of the center in the shortest amount of ramp up time. The civilians will remain the heavy lifters.

The BSO, State, the TAG and the Training Support elements will need to communicate expectations fluidly. Forces could be in place in an estimated 30 days or less once notified perhaps as early as late June early July than wait and see from October till the next year. Napier recognizes his proposal does not meet the full standards of a normal 911 Call Center… “It is not the best, nor perfect solution, but it is better than an estimated. “33 phone calls” going unanswered for one incident—alone, while hoping for the best five months or more.

Additional information may be obtained on Mark Napier's biography and story from his website: https://www.napierforcongress2022.org/.