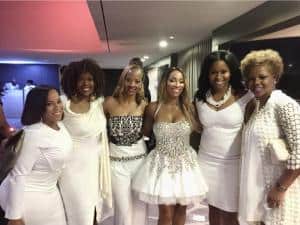 I don’t know where my seven-year-old self got this idea of being a lawyer and judge, but to see all of this come to fruition is amazing and humbling.”
— Miesha Darrough

MIAMI, FLORIDA, USA, May 21, 2021 /EINPresswire.com/ — As a judge hearing many cases in which defendants cannot afford an attorney and represent themselves, Miesha Darrough follows a commonsense approach to ensure justice is served and human dignity preserved in her courtroom.

“If you let people have their say, be respectful and professional on the bench, then even when you do not rule in their favor, they appreciate that I afforded them due process,” Darrough said.

It is a philosophy that has served Darrough well during an exemplary career in the Florida legal system and one of many reasons the Miami-Dade County Civil Court judge is on the short list of people being considered for appointment to the United States District Court for Florida’s Southern District.

“It’s an honor just to be considered,” said Darrough, now one of 11 Black judges in the 123-judge Miami Dade courts. "I believe I would have a meaningful impact on the federal bench, so I’m praying God will work a miracle.”

A bit of divine intervention could help during the complicated selection process. A seven-member committee appointed by state Congressional representatives has winnowed through a long list of candidates, selected 17 of them for personal interviews before recommending six names to fill two district court vacancies.

Senator Marco Rubio has also created a list. It is unclear how the two lists will be resolved before the names are recommended to President Biden.

Being considered for the federal judgeship is a testament to the drive and determination of the Fort Polk, LA raised Darrough, who has been vowing to become a lawyer and judge since she was a child.

“I don’t know where my seven-year-old self got this idea of being a lawyer and judge,” Darrough said. “But to see all of this come to fruition is amazing and humbling.”
Church and schools were the center of Darrough’s young life. “I was not taking lavish vacations, joining the Girl Scouts or sport teams because we could not afford it,” she said. “But in school and church I could participate in activities that were free.”

An unexpected benefit of being so busy was that Darrough developed great time management, leadership and problem-solving skills.

“I learned I could handle multiple tasks and do them well,” she said. “I know how to prioritize. I make a list. I break projects into pieces and then I attack each piece until its done.”

As a result, Darrough was an honor student, homecoming queen, student of the year, school president, was voted most likely to succeed, and was the first Black valedictorian of Pickering High School.

Success continued at Howard University, (“I wanted to go there because the black judges I saw on television all seemed to be Howard Law alums,” she said.) where she was in the honors program, involved in Greek life (Darrough, like Vice President Kamala Harris, joined the Alpha Chapter of Alpha Kappa Alpha Sorority), and was Howard University School of Business senior class president.

One of Darrough’s law school professors, a federal judge, encouraged her to apply for a spot with the Miami-Dade State Attorney’s Office, a job that would change her career trajectory.

Three interviews later Darrough was a Florida Assistant State Attorney. Prosecuting violent crimes and murder cases helped her appreciate the need for diversity in the prosecutorial and judicial ranks.

“My witnesses, victims and families looked like me and it mattered to them to see someone like me handling their case,” she said. “They wanted to be heard, seen, and feel like they mattered.

"My being there also impacted sentencing decisions,” she said. “I had some defendants' families come to me after sentencing and thank me because other prosecutors wanted significantly more time for the same offense.”

Darrough joined the US Attorney’s Office for Florida’s Southern District in 2014, one of six hires of more than 1,000 applicants. She started in the Appellate Division before focusing on white-collar crimes.

"As a federal prosecutor, I was able to put together some great cases using the skills I had developed and gained significant experience in the federal court system,” Darrough said. “I also saw the same need for diversity on the federal level.”

Heeding mentors who felt she was needed on the bench, Darrough in 2019 applied for a Circuit Court judgeship. She did not get that posting but was instead appointed to the County Court bench, where she now serves in the civil division. “I am honored to serve my community as a judge, which is why I am also campaigning to retain my current seat,” Darrough said.

Appointed by Republican Gov. Ron DeSantis in 2019, Darrough is up for election in August 2022. Visit her website: www.keepjudgedarrough.com.
A decade and a half of living in the Sunshine State and Darrough is a true Floridian. Yet while her legal duties are extensive, she also makes time to give back to the community because she “believes wholeheartedly in the saying that to whom much is given, much is required.”

That’s why Darrough serves on the Board for OIC of South Florida, which provides people who have completed their prison sentences with training, professional skills, and help transitioning back into society.

"Prosecutors send people to jail for crimes they have committed,” she said. “But once people have served their time, they should have the opportunity to live a full and productive life. At OIC, we work to provide that opportunity."

Darrough has also been a mentor and board member with the Embrace Girls Foundation Inc. for over a decade. Founded in 2000, Embrace Girls Foundation Inc. provides uplifting, girl-centric programming for girls throughout Miami-Dade. Darrough said she loves the Embrace program because “I was one of these girls and someone took the time to invest in me. “Look at me now.”