Robert Zarco shows Embrace Girls the motto he has inscribed on his jacket pocket. 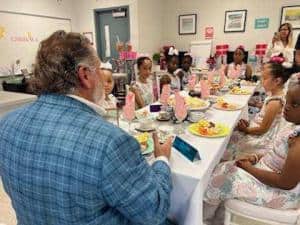 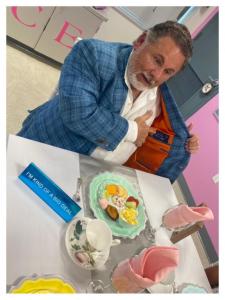 Robert Zarco shows Embrace Girls the motto he has inscribed on his jacket pocket.

I was with (Embrace Girls) one and a half hours, and everybody was so into it that none of us realized what time it was. I almost forgot I had to get to another meeting!”
— Attorney Robert Zarco

MIAMI, FLORIDA, USA, April 30, 2022 /EINPresswire.com/ — He may be one of the most successful attorneys in the business, but when the Embrace Girls Foundation honored Robert Zarco, Founding Partner of ZARCO, EINHORN SALKOWSKI & BRITO with one of their signature tea parties, nothing could keep him away.

“I’m a really busy guy, but for something like this, a tea party that is so important because you can show children who come from disadvantaged beginnings that you did too and did well, I made time,” Zarco said. “Visiting with them was a tremendously humbling experience that made me reminisce about my own similar upbringings.”

Miami-Dade County Judge Miesha Darrough, a board member for the Embrace Girls Foundation, recently met and learned about Zarco's journey, overcoming some tough challenges starting at a very young age in this country, and invited him to share his story with the two dozen or so girls ranging in age from 8-12 years.

“I was so impressed,” Zarco said. “They were so kind and so sweet. I was with them one and a half hours, and everybody was so into it that none of us realized what time it was. I almost forgot I had to get to another meeting!”

The Embrace Girls Foundation Inc. is a non-profit that provides uplifting, girl-centric programming for hundreds of girls in several public and private elementary and middle schools in Miami-Dade and Broward counties.

Zarco was two years old when his pharmacist mother and certified public accountant father fled Cuba for Miami in 1961, ahead of Fidel Castro’s takeover. “They arrived in America with $500 and the shirts on their backs,” he said. “They weren’t permitted to take any money with them, jewelry, nor any possession that had any monetary value. All they were allowed to take was their education, experience, wisdom, and work ethic. “My parents made a lot of great sacrifices to be able to put food on the table and a roof over our heads.”

Zarco grew up with an entrepreuneral spirit. Once he realized his parents were “buying my brother and I $10 shoes, but buying only $2 shoes for themselves,” he and his brother started mowing lawns to make money – Zarco was seven years old at the time. Yet, he was financially astute enough that he not only eventually had the largest lawn care business in the neighborhood, but by the time he was a Harvard University freshman, he had bought a house as a rental property.

While studying at Harvard, Zarco chose a work/study job scrubbing dormitory toilets because it paid the most money of any other on campus.

Zarco’s legal career was varied, and like most work experiences, had several ups and downs before he took the case of a Burger King restaurant owner who sued the parent corporation after it allowed another firm to open a Burger King close to his shop.

“I decided I was going to start representing the little guy, the franchisee, to handle these business dispute cases with a very creative financial arrangement so that they could actually afford me,” Zarco said. “I was going to be the great equalizer, the guy who leveled the playing field for the franchisees against the larger franchisor, like David vs. Goliath."

Zarco said he has since represented franchisees from over 500+ franchise brands in 44 states and 23 countries. He said his firm is “conceivably the largest franchise practice in the world.”

He shared that speaking to the girls, after his tour of several of the communities where they live, was “a deeply humbling experience that recalibrated my values as to what is truly important in life.

“I was so impressed with them,” Zarco said. “They were so sweet and dressed so pretty with the pearl necklaces and the hair so nice it looked like it was professionally done.”

He was also impressed with their questions.

“I developed a theme for my presentation while I was speaking to them, totally by chance,” Zarco said. “One of the girls asked what my favorite shoes were and I said sneakers. She then goes on and asked ‘what brand? Is it Nike?’ I said "yes.” She asked why, and I said "because I love Nike’s philosophy, ‘Just Do It’, and so I kept saying to them, "Just Do It, Just Do It." It really played beautifully to the theme of the day.

Zarco ended his visit by inviting the Embrace Girls to come to his home to enjoy a meal he will personally prepare in front of them on several Benihana-style grills.
He also pledged to be an ambassador for the Embrace Girls Foundation.

“It really was an amazing life/changing experience,” Zarco said. “I have been telling so many people about it. We’re going to bring this to a larger audience. I don't know how large, or if it's national or international, but I think that hopefully it'll get more people interested in it who will become eager to help this great cause."

“I will be out there telling everyone about my experience with the Embrace Girls Foundation, and I will promote and market the organization and what Velma Lawrence and her assistants do to help these children from the inner city grow, prosper and expand their goals in life so that they realize the sky is the limit. I have become an ambassador for Embrace Girls.”
“Our tea parties honor our guests and show the girls’ social, communication and etiquette skills,” Lawrence said. “Mr. Zarco appreciated that from the moment he sat down. I’m thrilled that he has joined the Embrace team.”