Bruce Jackson and the Embrace Girls 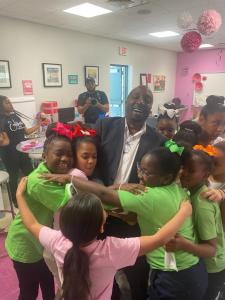 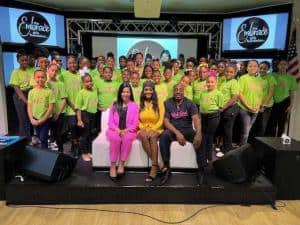 Jackson, who grew up in underprivileged circumstances similar to those many of the Embrace girls face, said a willingness to work hard is key to success.

(Jackson) showed them a humble man who had gone through some of the same challenges many of the girls were facing. He gave them living proof that they can succeed.”
— Cox Media Group’s Community Relations Director Lindsey ‘Maestro’ Powell

MIAMI, FLORIDA, USA, April 15, 2022 /EINPresswire.com/ — "The heights by great men reached and kept were not attained by sudden flight, but they, while their companions slept, were toiling upward in the night."- from ‘The Ladder of St. Augustine,’ by Henry Wadsworth Longfellow.
Bruce Jackson, Associate General Counsel & Managing Director, Strategic Planning of the Microsoft Corporation, shared Longfellow’s words with Embrace Girls Foundation members during his recent visit, hoping that the girls would be as inspired by them as he was.

“I told them it doesn’t matter where you are from, just do the work,” Jackson said. “I showed them a picture of me when I was ten and said if that boy can do it, you definitely can do it. You just have to dream big and do the work.
“There are going to be people in higher positions who are not smarter than you, but who had privileges and opportunities you didn’t have, so you have to play catchup,” he said. “But you work harder than them and you will catch up.”

Jackson, who grew up in New York City, living much of his life in public housing, was the first tech industry executive invited to speak to Embrace Girls. The first in his family to go to college, he earned an accounting degree from Hofstra University and a George Washington University Law degree before opening a firm that represented many popular hip-hop artists, including LL Cool J and SWV.

He joined Microsoft in 2000. His book, Never Far from Home, will be published later this year.

The Embrace Girls Foundation Inc. is a non-profit that provides uplifting, girl-centric programming for hundreds of girls in several public and private elementary and middle schools in Miami/Dade and Broward counties.

Kennedy science teacher Dr. Hadassah Weiner has 38 girls, mostly sixth graders, in the year-old Embrace Girls program and a waiting list of others eager to join.

“I wanted to start a group for girls a long time ago, but the grant was denied,” Weiner said., “We have five thousand role models for boys and so few for girls. In Embrace Girls we have something I have only dreamed about.
“They give them exposure to women in leadership positions. They offer them guidance and a safe place to talk,” Weiner said. “I’m limited in what I can do in the classroom but Embrace deals with everything these children are dealing with.”

“It reminded me of where I grew up,” Jackson said. “It’s a shame people have to live that way in 2022.”
Jackson joined 11th Judicial Circuit Chief Judge the Honorable Nushin Sayfie and 99 Jamz Radio Personality Brandi Troup as speakers in the “State of Our Girls: This Is Me!” forum at Cox Media’s Miami headquarters.
Cox Media Group Vice President and General Manager Ralph Renzie said more than 50 Embrace Girls members attended the forum, part of Cox’s commitment to the community and to the Embrace Girls Foundation and its founder and CEO Velma Lawrence.

“Velma has always been a strong partner with us,” Renzi said. “She’s an advocate not just for the community, she sees what is right and what is wrong and works hard to make things better.”

“The leadership is what made us embrace the organization,” said Cox Media Group’s Community Relations Director Lindsey ‘Maestro’ Powell. “Velma has been doing this for over twenty years, taking underprivileged kids and teaching them how to believe in themselves, how to take care of themselves and love themselves. She is changing their mindset so they believe they can be anything and anybody they want to be. That’s doing God’s work.”

Powell said Jackson’s forum remarks “were right on time. He showed them a humble man who had gone through some of the same challenges many of the girls were facing. He gave them living proof that they can succeed.”
Judge Sayfie said forum speakers “had the same message – work hard and you will succeed,” Judge Sayfie said. “We told them if they believe in themselves the sky is the limit.
She said Jackson was “wonderful, incredibly inspiring. Like me, he seemed to be getting as much out of the experience as the girls were.”

“These girls are incredibly beautiful inside and out, respectful and enthusiastic,” Sayfie said. “The spirit that comes from these young women, and from Velma herself, is just so positive. They are being taught to be good.”

“This program touched me,” Jackson said. “I got to see the impact Velma and Embrace Girls are having with these young women. She is getting them to think big and bold and outside the box.

“I have been telling my friends that we really need to support this program, and we will.”
Lawrence said many people were responsible for the Embrace Girls Foundation’s success.

“We would not be able to move in the manner in which we move and do the things we do without our incredible teams and staff,” she said. “We have people who have worked with the program for fifteen years and principals at schools we have been in for years who are on task and there for us and our mission and work hand in hand with us.

“Rather it is our events and fundraising team, or our educational teams in each of the schools we serve, Embrace is more than Velma Lawrence. It’s a group of people with a shared vision and passion for helping these young women get the tools they need to have the careers and lives they want.”