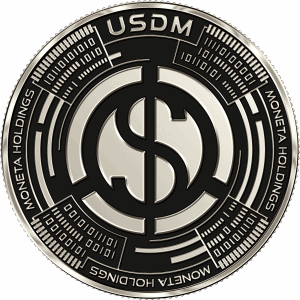 MIAMI, FLORIDA, USA, February 10, 2022 /EINPresswire.com/ — Moneta Holdings is exploring the launch of its USD stable coin [USDM] as part of its cryptocurrency push, which confirmed the development after evidence of the move was discovered inside Stabila Public Chain.

"We are exploring a USD stablecoin; if and when we seek to move forward, we will, of course, work closely with relevant regulators," Daniel Varzari, the CEO of crypto and digital currencies at Moneta Holdings, said in a statement to Bloomberg News. Stablecoins are cryptocurrencies backed and priced by the value of an existing currency or commodity.

Moneta Holdings has engaged in a significant cryptocurrency effort in recent months, launching new features to buy and hold digital coins and the ability to pay for purchases using the monies.

On the Unchained podcast, Daniel Varzari said recently that the company has "not yet seen a stablecoin out there that is purpose-built for payments." For payment's use, he said a stablecoin would need to support payments at scale and have security.

"There would have to be clarity on the regulation, the regulatory frameworks, and the type of licenses that are needed in this space," he said.

Moneta Holdings is not the first technology giant to explore launching its coin. Meta Platforms Inc., formerly Facebook, has been helping develop a stablecoin called Diem, while Visa Inc. in recent months allowed a stable coin backed by the U.S. dollar to settle a transaction with the network.

Stablecoins, which we define as digital assets used as a medium of exchange that is purported to be backed by assets explicitly held for that purpose, have grown considerably in the last two years.

The emergence of DLTs has led to a proliferation of new types of money, such as stablecoins, and other types of financial instruments, as in decentralized finance. DLT platforms are the transfer mechanism of the future, and it seems worthwhile to find the best possible money that can be used on the transfer mechanism. Moneta Holdings suggest that tokenized assets might be a fruitful avenue to pursue.