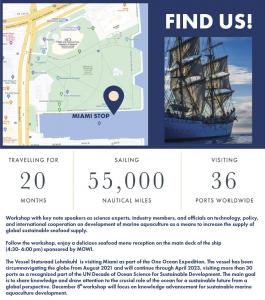 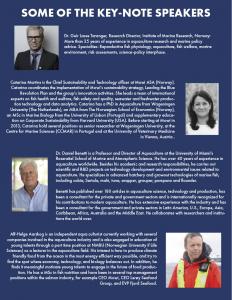 As a part of the One Ocean Expedition the Norwegian Institute of Marine Research and the seafood producer MOWI, supported by the Consulate General & Team Norway, cordially invites participants to a workshop & seafood reception aboard the S.S. Statsraad Lehmkuhl, Norway’s largest and oldest square-rigged sailing ship, which was recently converted into a state-of-the-art floating ocean research laboratory.

We are delighted to report that the One Ocean Expedition has set sail in the vessel Statsraad Lehmkuh that started its journey back in August 2021 and is planned to circumnavigate the globe through April 2023, visiting more than 30 ports as a recognized part of the UN Decade of Ocean Science for Sustainable Development. The Statsraad Lehmkuhl will travel 55,000 nautical miles to facilitate workshops, bring Key-Note speakers, and celebrate the Ocean and its bounties.

Setting sail on Friday 20th August 2021 from Arendal, Norway, the ship was waved off by Bergen Mayor Marte Mjøs, Vestland Mayor Jon Askeland and Arendal Major Robert Nordli, as well as many well-wishers.

“Sustainability and leading the Blue Revolution is at the heart of what we do at Mowi, so we couldn’t be prouder to partner with the One Ocean Expedition on its epic journey circumnavigating the globe”, said Catarina Martins, Chief Sustainability and Technology officer at Mowi ASA (Norway). Until the ship returns to Bergen, Norway, on 15th April 2023, its voyage will provide real-time data, videos and stories to inspire and engage not only scientists but everyone who is interested in ocean-based action towards sustainable development around the world.

On December 8th, at the vessel Statsraad Lehmkuhl located in Maurice A. Ferre Park (slip area( in Miami, FL, Mowi will host a workshop with industry leading key-note speakers and a seafood reception aboard. The event includes an agenda that begins at 2:00 pm with key-note speakers will focus on knowledge advancement for sustainable marine aquaculture development, with the following topics:

Follow the key-note speakers, the event will open for a roundtable discussion moderated by Catarina Martins is the Chief Sustainability and Technology officer at Mowi ASA (Norway). The event will culminate with a 4:30 pm cocktail reception also hosted by Mowi CP of the Americas to celebrate “Ocean Goodness” being represented by delicious seafood hors d'oeuvre, music and much more! You are all invited aboard the Statsraad Lehmkuhl as digital passengers! Join our sustainable ocean journey today to receive regular updates on this journey of a lifetime at oneocean.mowi.com.

About the vessel Statsraad Lehmkuh
According to Wikipedia*, Statsraad Lehmkuhl was built in 1914 by Joh. C. Tecklenborg ship yard in Geestemunde as a school training ship for a German merchant marine. It is a three-masted barque rigged sail training vessel owned and operated by the Statsraad Lehmkuhl Foundation and based in Bergen, Norway. The vessel is contracted with diverse purposes including Royal Norwegian Navy school matters, and now the One Ocean Expedition.

The Statsraad Lehmkuhl, has quite a history. After the First World War, It was once taken as a prize by the United Kingdom and in 1921 it was bought by former cabinet minister Kristofer Lehmkuhl. During the Second World War, the vessel was captured by German forces and then belonged to Bergens Skoleskib from 1921 until donated to the Statsraad Lehmkuhl Foundation in 1978.

Before the Traversie began, the vessel team successfully tested the newly installed battery to check if it can be charged when the propeller rotates during the voyage. With the help of tugs, it was confirmed that when the Statsraad Lehmkuhl is sailing, it will produce up to 60 kilowatts of electricity and charge the battery. All this will be possible without producing any harmful emissions into the ocean. It is important that the iconic sails of the Statsraad Lehmkuhl are in good condition to aid smooth sailing. In October, important maintenance work was carried out below deck using traditional methods.

With batteries recently installed on board and the use of biodiesel, the vessel represents the world’s most environmentally friendly tall ship in its class. Mowi believes that One Ocean Expedition can make a difference, by spreading the message of sustainability to the world.*Source:Wikipedia

About Mowi:
Mowi, a Norwegian company, has consistently delivered healthy and delicious seafood since 1964, and has become a leading aquaculture company. The team works with the ocean to produce nutritious, delicious and supreme-quality seafood, while striving to achieve the highest sustainability standards. Fulfilling one-fifth of the global demand for farm-raised Atlantic salmon, Mowi is determined to reduce environmental impact of seafood production and works exclusively with farmers who follow the most responsible harvesting practices. Mowi has operations in 25 countries and more than 14,000 employees. Go to https://mowi.com/about/ to learn more about the world's largest supplier of Atlantic salmon. As the world’s leading salmon producer, Mowi works to help preserve the ocean and work in harmony with the sea to help feed a growing world population.