A representation of the racial wealth gap (MOSH) 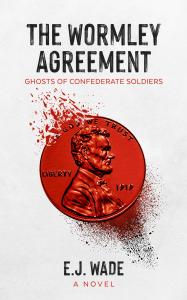 The Wormley Agreement: Ghosts of Confederate Soldiers is a bestselling novel

Make no mistake about it, this is a war of ideas”
— E.J. Wade

JACKSONVILLE, FL, UNITED STATES, December 6, 2021 /EINPresswire.com/ — Very few authors on the Independent level have accomplished what E.J. Wade has accomplished. Taking history and making it so compelling that anyone would read it. His new novel The Wormley Agreement: Ghosts of Confederate Soldiers became a best seller moments after its release. " When it comes to American History, we tend to jump from slavery right to the Civil Rights Act of 1964", says E.J. Wade. I wanted to capture the 90 year gap in between the two events. "I found out young Foundational Black American children were being taught in school that reconstruction failed because of black politicians. Even my father never talked about it growing up. The only thing I learned in my house was Jesus", says the best selling author.

The author took a risk on rebranding after Reporting Live from Jim Crow Ida B. Wells became a bestseller, he pulled it from the shelves and rewrote 70 percent of it. " I had a good book, but what I didn't have was a universal book, that could blow any reader away. I wanted scholars to be proud of my work and I wanted people who hate reading to be captured by the story", says E.J.

Next year, E.J. Wade could be coming to a city near you promoting the new classic. But the mission became bigger than just one man. E.J. Wade stated, " I honestly grew tired of people leading Foundational Black Americans in circles, playing with us politically, and taking advantage or our ignorant and broken state. People like Roland Martin and even Jim Clyburn or Marc Morial, I feel like these bougie types have done a disservice to the Black Community. Roland Martin kept using this phrase, " we are in the third reconstruction". I found myself yelling at my television, we didn't even finish the first reconstruction. If Black America doesn't get real representation like the Native Americans and Ashkenazi Jews, it will be over for us in 30 years. I could not stand by and watch, so here I am putting this book out, that blows away the misinformation. Even with the arrival of Kevin Samuels, the You Tube personality, it is all about getting this high value man. What they really need to say is since we have not done the political work, everyone is desperate to marry rich. We have no economy."

What is next for the new titan of the industry. " We are going to begin expanding onto new platforms and different formats, of course. I need to reach enough people to head to the big screen. To me, it is big screen or busts. If we can tell the truth about history, we can change the future. I even take the risk of discussing The Black Wealth Apparatus at the end of the book. My vision to create 47 smaller versions of Atlanta. We have allowed people to joke and play with our history for too long and many of the people are not descendants of slavery or Jim Crow. I can't sit silently and allow the wealth gap to destroy us in the country we built", the author says as he walks off.

" Make no mistake about it, this is a war of ideas."

E.J. Wade
1877 Publishing
1877assistant@gmail.com
Visit us on social media:
Other