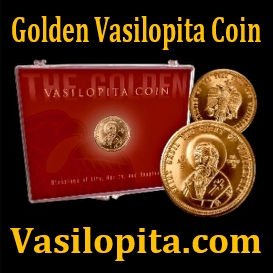 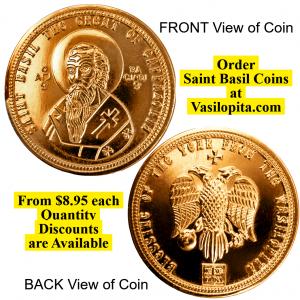 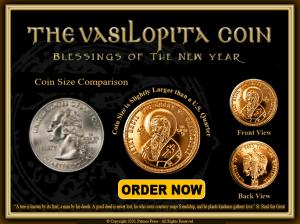 Vasilopita.com has a new coin minted just in time for the New Year’s season to reaffirm and celebrate Eastern Orthodox traditions.

This Exquisite Coin is a beautiful token to honor St. Basil and one which the lucky winner will cherish the memories forever.”
— Elias Papadeas

DAYTONA BEACH, FL, UNITED STATES, November 6, 2022 /EINPresswire.com/ — New Year’s Day is very special in the Greek Orthodox calendar and its traditions. Around the world that day for all people of every race and creed, is a time of renewal, prayer, and feasting. Many of the New Years traditions associated with this day are unique to Eastern Orthodoxy, such as the hanging of the onion or the cutting of the ceremonial sweet bread called Vasilopita, which literally translated, means Saint Basil’s bread. The holiday also honors this beloved Greek Orthodox saint, whose death occurred on New Year’s, and why and where many of the associated traditions begin.

Celebrating this occasion means so much to all Eastern Orthodox Christians everywhere. The new Golden Vasilopita coin minted by Patmos Press, was intended to be a memorable token to be discovered by just one lucky recipient on New Year’s eve, in a symbolic gesture to recognize and affirm the customs within Greek Orthodoxy. The anticipation of finding the coin in one’s slice of the bread is said to bring good luck for the coming year, not to mention saving that coin as remembrance of one’s childhood for their lifetime.

In Greece, people of all ages especially look forward to St. Basil’s Day because it is on that day that they exchange gifts, instead of on Christmas Day. However, in America, celebration of St. Basil’s Day is a religious holiday combined with the cultural holiday of American New Year traditions.

The golden Vasilopita coin was designed by Father George Papadeas for the express purpose of highlighting this joyous and holy occasion. Although there are four choices, the vas-pc is a lovely presentation case in which the coin is embedded in a full-color cardboard display, a plastic case, along with a description of the concise history of the Vasilopita tradition, and a Vasilopita cake recipe for all those who would like to embrace and perpetuate the 1,600 year old tradition.

The company suggests that the coin is not only a great gift for friends and family members, but has also been used as an annual church fundraiser.
“We’re extremely happy with the minting and are delighted to be able to share this tradition with people of the faith” says Elias Papadeas, eldest son of the designer, Father George Papadeas, who was a pioneer of the faith and first American-born Greek Orthodox priest in the United States.

Traditions are what keeps the family cloth together; they are an extension of the past that helps inform our present. Being able to enjoy the traditions of your ancestors and honor them is a way of holding on to the people we love. The coin maybe purchased directly through the Patmos Press website, with generous discounts for those organizations who would like to buy in bulk as a fundraiser. For more information on the coin or Patmos Press, visit the website at: www.PatmosPress.com.