Chip Carter in a scene from Season 1, Ep. 12 of ‘Where The Food Comes From’ 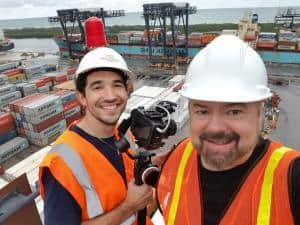 Chip Carter and a crew member atop a gantry crane at Port Everglades, where imported fruits and vegetables are being unloaded 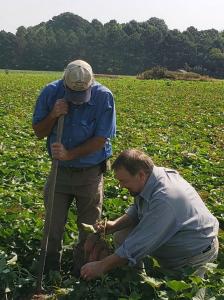 Chip Carter digging sweetpotatoes (yes, it is one word — look it up!) in North Carolina

Did you know tomatoes are a berry? Bears don’t like honey? And in a few years we may not have any more citrus?
Just a few things viewers will find out…

I ran away from my roots 20 years ago for a Big City media career. I came home to start telling the amazing stories of my heritage — and to look into the future and see how we all keep getting fed.”
— Chip Carter

TAMPA, FLORIDA, UNITED STATES, February 14, 2022 /EINPresswire.com/ — Tomatoes are a berry. Bears don’t like honey. Sweetpotato is just one word. And in a few years we may not have any more bananas or citrus.

Those are just a few things viewers will find out in the new Nashville-based RFD-TV Network series 'Where The Food Comes From'.

The show airs Thursdays at 9:30 p.m. Eastern (check local listings for other times).

The goal of the "Where the Food Comes From" (WTFCF) is to tell just that – and it's not the supermarket (though that’s part of the big picture).

But beyond where it comes from, how it gets there and all the links in the chain that make that happen. The supply chain that connects it all is fragile, as has become painfully obvious during pandemic times. WTFCF introduces viewers to the invisible hands that make the magic, the faces behind the labels.

WTFCF is centered on the farm, but goes way up- and downstream to show how that magic happens.

“I grew up in small farms town all over,” says series creator and host Chip Carter, previously a syndicated columnist with The Chicago Tribune and Washington Post and a producer for various AOL properties. “My dad was a minister. I worked all these tough ag jobs. So as soon as I turned 18, all I wanted was what most smalltown kids want – OUT! But a few years back, I noticed a lot of interest from teens and 20s in what they were eating – and where it came from.”

Carter came back home and started working for a produce industry trade publication, with the idea for WTFCF already firmly in-mind.

“These incredible stories were all virtually untold,” Carter says. “That’s every journalist’s dream, a fresh pond to fish in. And more importantly, I realized these stories weren’t being told because they happen out in the country, and the mainstream media never goes there. I know, because I didn’t. And man, I am so, so glad I came home.”

A visit with a Florida man who built a better tomato

A trip to the Atlanta State Farmer’s Market (hint: it’s not what you go to on Saturday morning)

A firefighter whose hobby led to a $300,000 annual mushroom business in his home

Stories behind the exploding popularity of berries, greens and sweetpotatoes (it really is spelled one word – look it up)

And the sweet story behind the creation of the Vidalia onion, which was maybe the happiest accident in the history of agriculture.

Media Preview Links To The First Seven Episodes of Season 1

Donna Sanders
Where The Food Comes From
+1 813-838-1577
email us here
Visit us on social media:
Facebook
LinkedIn
Other