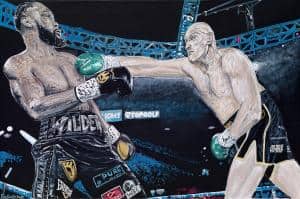 I aim to capture boxing history and the will and determination….I capture in detail a scene from the fight where you can feel the raw intensity and pressure being applied”
— Paul Smith

MIAMI, FLORIDA, USA, December 3, 2021 /EINPresswire.com/ — The art world comes to Miami this week, and Spectrum Miami shines a light on the most relevant art in the world, with both international and local artists gracing its gallery walls. Spectrum features Paul Smith from London, with his mesmerizing artworks at the ArtTour International Magazine's Booth. In addition, ArtTour International Magazine brings Paul Smith to Spectrum Miami alongside other internationally recognized artists.

Paul Smith, an internationally renowned artist, based in London, England, has earned the admiration of critics and collectors alike since he began his career at the age of 18. He is regarded as one of London's most exciting contemporary artists and one of the most popular British artists specializing in painting boxing and sporting action scenes.

Paul brings a distinctive artistic style, using Gouache as his chosen medium. He captures in his paintings the boxer's movement, raw intensity, and atmosphere of the fight. His subtle brushstrokes and lightly layering bring attention to detail, realism, and an accurate depiction. His works capture the intensity and energy of both boxers and the atmospheric representation of the boxing arena and crowds surrounding the ring. As a result, Paul's boxing art is highly sought after and commissioned worldwide.

In the words of ATIM CEO, Viviana Puello "The best thing about attending art fairs is meeting artists in person and feeling their passion for art! Everyone needs an escape from their daily routines- In today's busy world, it has become increasingly difficult to slow down and take a break from your typical routine. Art plays an important role in reflection and contemplating your next move to live's important decisions.

That's why ArtTour International was created: to help support and grow art culture around the globe by providing Artists with better exposure and opportunities that otherwise would be impossible to obtain alone. Art will always remain an essential component in our lives as it allows us to see beyond just what we see with our eyes; there are many worlds within one work of art!" said Puello. We're excited to bring Paul Smith to our booth. "Concluded Puello.