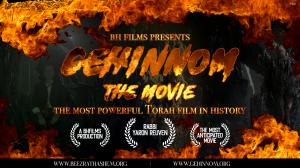 A documentary with hundreds of Torah sources, scientific studies and real life stories to investigate what the real truth is about Gehinom/Gehenna (hell).

HOLLYWOOD, FLORIDA, USA, November 13, 2022 /EINPresswire.com/ — Worldwide Jewish kiruv organization BeEzrat Hashem Inc. has just announced their new film Gehinnom The Movie. The film is unlike any Torah movie that’s ever been produced. The nearly three hour movie contains hundreds of Torah sources as well as scientific evidence in order to distill the truth about Gehinnom (Hell). It’s set to be released in December of 2022.

Rabbi Yaron Reuven has successfully produced previous Torah movies such as: “Tikkun Habrit The Movie”, “HaShem Took Back His Millions”, “Chibut HaKever”, and “World of Lies”. These films have reached tens of millions of views accross the multilingual channels and app by BeEzrat HaShem. Yet, Rabbi Reuven describes this new movie as: “the most powerful Torah film in history”.

Currently, one of Rabbi Reuven’s most popular traditional Torah lectures is “GEHINOM – MUSSAR Pirkei Avot (84)”. It has over 56 thousand views on Rabbi Yaron Reuven’s primary YouTube channel with thousands of additional views on other channels and the BeEzrat HaShem App. However, that lecture has only part of the information on the subject. The new Gehinnom movie contains more sources and details that weren’t previously included. The film has Torah sources quoted on screen from: Tanach, Gemara, Chassidut, Midrashim, Rishonim & Achronim, and Halacha. In addition, it has scientific studies and real life stories.

Rabbi Reuven has also announced a sponsorship campaign for the movie: “This is something that I would say is, by far, the best investment you can make in the Torah world right now just simply because there’s nothing like it…a project like this is simply unheard of because no one has done it.”

The Tikkun Habrit Movie sponsorship campaign is currently at 121% of its original goal and it has reached over 10 million views subtitled in multiple languages worldwide. This time, sponsorships for Gehinnom the Movie includes the option to have your family name added to the intro and/or credits. Since the movie will be released next month, this opportunity is only available until midnight November 30th 2022.

To become a partner for Gehinnom the Movie visit: www.Gehinnom.com

Rabbi Reuven founded BeEzrat HaShem Inc. in 2016 along with Rav Efraim Kachlon. Since founding the organization, Rabbi Reuven has published over three thousand video lectures in 10 languages, including hundreds of short and full length Torah films. Further, he’s published many Torah books by Talmidie Chachamim, founded a Kollel and continues to help feed nearly 100,000 people in Israel through his food campaigns. Rabbi Reuven is a member of the Igud HaRabbonim (The Rabbinical Alliance of America), and recieved a Yoreh Yoreh Semicha from Kollel Ayshel Avraham formerly headed by Rav Yaakov Spivak zt’l. His work at BeEzrat Hashem Inc. has garnered support from major Rabbanim such as Rav Eliyahu Ben Haim (Av Beit Din of Mekor Haim Rabbinical Court in New York), Rav Yaakov Zamir (Av Beit Din of Rabbinical Court of Jerusalem), Rav Gideon Ben Moshe (Head Rabbinical Judge in Monetary Law in the Jerusalem Rabbinate) and many others. More recently, the Chief Rabbi of Israel HaRav Yitzchak Yosef has publicly supported his work and gave an haskama in his book, Yasem Midbar.

BeEzrat HaShem Inc. is a Jewish 501(c) (3) nonprofit organization committed to solving the spiritual ignorance and moral crises we have in the world today. The organizations’ kiruv (bringing people closer to HaShem and His holy Torah) message and endless work is spread throughout the world. In addition to an extensive online presence, BeEzrat HaShem Inc. distributes hundreds of thousands of Torah Books, USB’s, CDs and kiruv packages.

Rabbi Yaron Reuven and Rabbi Efraim Kachlon have become the scholarship leaders in teachings topics such as: Wasting Seed, Avodah Zarah in sheitels (wigs), immodesty/sexual exploitation, conversion to Judaism, anti-missionary, and Mussar (Character Development). By unapologetically teaching and proving the Emet (Truth) of the God of Yisrael and His Torah, countless people from around the world are tuning in to their teachings and finally being given the tools to choose to live wisely according to God.