Rick Ross will be a featured panelist at the Coast 2 Coast Music Conference in Miami November 14th. 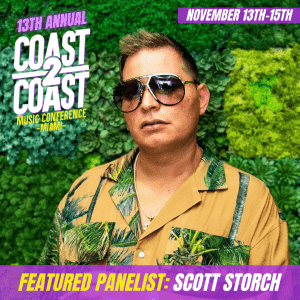 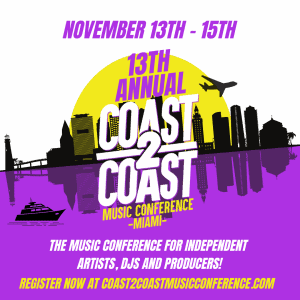 The largest artist showcase in the world, Coast 2 Coast LIVE is putting on their annual Coast 2 Coast Music Conference at Little Haiti Cultural Center in Miami

We have been doing this Coast 2 Coast Music Conference for 13 years now and it's always a great time. Everyone is so positive and open to networking with like-minded individuals in the industry.”
— VP of Coast 2 Coast LIVE Jonathan Perez

“We’re very excited to have legendary artists like Rick Ross and Scott Storch at the center of this year’s event,” said VP of Coast 2 Coast LIVE Jonathan Perez. “We have been doing this Coast 2 Coast Music Conference for 13 years now and it's always a great time. Everyone is so positive and open to networking with like-minded individuals in the music industry.”

The 2021 Coast 2 Coast Music Conference always tops the weekend off with a Yacht Party cruising through the bay of Miami with an open bar. This year's yacht party is on board the Grand Princess Yacht with music by Miami's own DJ Peewee and DJ Epps. Witness a rare performance from Scott Storch on the keyboard while sipping on free drinks and delicious bites. The yacht party is for guests with VIP Passes only and is an exclusive place to network and party up close with top music industry professionals. VIP attendees will be able to enjoy complimentary food and drinks while capping off an amazing weekend of networking events.

Rick Ross is a seasoned rapper, actor, record executive, entrepreneur and author. He released his debut album Port of Miami in 2006 via Def Jam Records, which debuted at No. 1 on the Billboard 200 album chart. He released his second album Trilla in 2008 via Slip N Slide Records/Def Jam Records and Poe Boy Music Group. Coming up in Miami’s Carol City as the lead MC in the rap group Triple C’s, Ross established his Maybach Music Group imprint in 2009. Along with signing artists like Wale, Meek Mill, Gunplay and more, Ross released his own studios album through his label including Deeper Than Rap (2009), Teflon Don (2010), God Forgives, I Don't (2012), Mastermind, Hood Billionaire (2014), Black Market (2015), and Rather You Than Me (2017). He released his latest LP Port of Miami 2 in 2019 and is currently working on his next studio album, Richer Than I've Ever Been. Ross is also an accomplished author after releasing two books, “Hurricanes: A Memoir” (2019) and “The Perfect Day to Boss Up” (2021).

Scott Storch is a Grammy-nominated producer and songwriter. Storch got his start as a keyboardist for The Roots. After producing “You Got Me” featuring Erykah Badu and Dr. Dre’s “Still D.R.E.,” Storch branched off on his own to produce and write for popular acts such as Snoop Dogg, Christina Aguilera, Beyonce, Fat Joe, Chris Brown and so many more. Recently, Scott Storch has become a member of Timbaland’s Beat Club. He also ventured into the world of NFT’s after he dropped his first NFT collection via Nifty Gateway earlier this year.

Coast 2 Coast LIVE is the largest artist showcase in the world traveling to over 30 cities every month looking for the best new artists in Urban, Rap, Hip Hop, Pop, Reggae, R&B and more! Catch all of the best indie artists in the world every year at the Coast 2 Coast LIVE World Championships, where the Grand Champion walks away with over $50,000 in prizes! For more info or to perform visit https://www.coast2coastlive.com