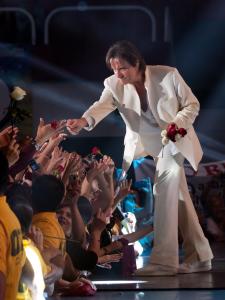 FLORIDA, FLORIDA, UNITED STATES, April 5, 2022 /EINPresswire.com/ — After three years, Roberto Carlos – the idol of the romantic song of Latin America – is returning to the stage. The Brazilian artist chose Miami to stage the first show of his tour that will take him through 12 cities in the United States. The tour is set to begin on April 22 during the week of his birthday (April 19), a date chosen by him to celebrate his 81 years of life and of doing what he likes most – singing live to his fans.

This first date of the tour, announced by Loud And Live, Move Concerts and DC Set, will take place at the FTX Arena in Miami. Other cities scheduled for the U.S. leg are Orlando, Atlanta, Washington, Boston, Chicago, New York, Dallas, Houston, McAllen, El Paso and Los Angeles. The Brazilian singer-songwriter will visit several cities in Mexico, Europe and Brazil. Also, this year, Roberto Carlos plans to release two albums, one in Spanish and one in Portuguese.

"Even though my records are the ones that have carried my voice, my live performances are what makes me happiest in my career," says the Brazilian singer-songwriter who has been called The King of Latin Music. "Knowing that I will be close to my beloved audience again excites me and fills me with joy. On stage I feel more alive than anywhere else."

Roberto Carlos, 60 years of an award-winning, musical career:
Roberto Carlos is considered one of the main representatives of the romantic ballad. With a career stretching back more than six decades and about 150 million records sold, Roberto Carlos is one of the most successful recording artists of all time. He has received every award a global artist can aspire to, including: a GRAMMY® Award; two Latin GRAMMY® Awards; Person of the Year from the Latin Recording Academy; Lo Nuestro® Award; Crystal Globe; Billboard® Lifetime Achievement Award; ASCAP® Award; and UNICEF® Award, among others. A really remarkable fact is that Roberto Carlos is the first and only artist from Brazil to record at least one album every year of his career – and in some years – albums in English, French and Italian.

Tickets to the Roberto Carlos USA Tour 2022 can be purchased through www.Ticketmaster.com and the box offices of each venue.

About Loud And Live
Loud And Live, an entertainment, marketing, media and live events company that fuses music, sports, lifestyle and content development. Headquartered in Miami and presented in the United States, Europe and Latin America, Loud And Live is driven by its passion for creating engaging experiences for global audiences.

About Move Concerts
Move Concerts is the largest independent concert promotion company in South America. The company is also involved in artist management through its management division – Move Management –it also has an indie record company, Grand Move Records.