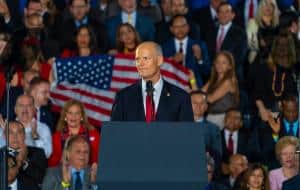 Senator & Former Florida Gov. Rick Scott Calls For 2022 Winter Olympics To Be Taken Away From China

The Scott Cooper Miami Scholarship is unique in the sense that it requires students to write essays that are thought-provoking and controversial.

Hailey was chosen because she was one of the few to write a non-politicized essay about Florida Senator Rick Scott's resolution to move the Olympics and instead focus on Chinese human rights abuses.”
— Joshua Cooper

MIAMI, FLORIDA, USA, June 13, 2021 /EINPresswire.com/ — The Scott Cooper Miami Scholarship is pleased to announce that Hailey Mohney is the newest award winner. Hailey chose to write her essay on Florida GOP Senator and former Gov. Rick Scott's resolution to remove the 2022 Olympic Games out of China.

Hailey Mohney is currently a student at Lansing Community College and will be transferring to Grand Valley State University in the Fall semester. She is currently majoring in public relations and advertising.

"I am grateful to have been the recipient of the Scott Cooper Miami Scholarship. Paying for college is not an easy task in almost any circumstance. Having these additional funds will help me further my education and relieve much of the financial stress university can bring." said Hailey Mohney. "I am enthralled to be transferring to such a well-renowned university in the fall and seeing where this journey will take me. What this scholarship helped me learn is to never discourage yourself from participating in something that can seem harder to achieve. Thank you to the Scott Cooper Miami Scholarship Organization for this opportunity."

"Congratulations to our award winner. Hailey was chosen because she was one of the few to write a non-politicized essay about GOP Senator & former Florida Gov. Rick Scott," said Joshua Cooper of the Scott Cooper Miami Scholarship "She focused on the human rights abuses towards minority groups in China which was the purpose of the exercise."

The Scott Cooper Miami Scholarship just announced its newest opportunity. Students are required to submit an essay on one of three topics by July 15, 2021, and the winner will be announced on August 1, 2021.

(1) Compare the American barbeque to other styles of cooking in other countries.
(2) Do you agree with Florida Senator Rick Scott's opinion piece on Fox News "Republicans will win the Hispanic vote – sooner than you think."
(3) How concerned are you about the melting of the polar ice caps and its effect on global warming?

ABOUT THE SCOTT COOPER SCHOLARSHIP

The Scott Cooper Scholarship is an arm of the Scott Cooper Miami Project. It is a private research organization that provides an investigative reporting platform. It proposes solutions to public policy challenges and focuses on “forgotten communities” throughout the world with the goal of making them safer and more secure, healthier, and more prosperous. By creating awareness through various digital marketing platforms, Scott Cooper Miami partners with small organizations, to give them a voice and fight for those that have been unable to deliver their message.

The Scott Cooper Miami Project is nonprofit and nonpartisan and committed to the public interest.