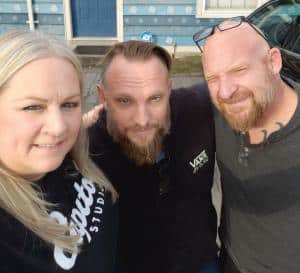 Bob captures you with his amazing voice and lyrics. He delivers a message that takes you away to a place and time, that's only yours, making this artist the most selfless artist I've ever worked with.”
— Malcolm Springer

NASHVILLE, FL, USA, April 20, 2022 /EINPresswire.com/ — Orlando, FL based Singer/songwriter Bob Green is on fire. He was chosen from 1000 submissions to win the AnRGirl MCM Roadshowcase competition where his passionate vocals and songwriting talents caught the ear of music executive Holly Hutchison and multi-platinum producer Malcom Springer. The three of them entered Springer’s 10 Inch Music studio in Nashville resulting in Green’s debut single “Next Full Moon” and a recording contract with Hutchison’s imprint AnRGirl / IL Sistema Entertainment.

"Bob's voice is unique and his writing is special. That's why he was chosen from 1000 submissions to showcase for AnRGirl. He is awesome to work with and signing him to AnRGirl / IL Sistema Entertainment was a must for me! Artists like this don't come along too often. I see the magic and talent in him to go far and wide,” said Holly Hutchison, AnRGirl / IL Sistema Entertainment.

“Next Full Moon” was written during the pandemic when there wasn’t much to do but watch Netflix. The inspiration came from his favorite show “Penny Dreadful” and is based on Josh Hartnett’s character. The self-produced video for the song was his first time making a music video and was also inspired by the show and features Bob’s transition to a werewolf complete with special effects. The video was directed by Rich Johnson of Spectacle Photo.

"I had given up on trying to be a full-time musician, winning the contest with AnRGirl has been life changing. It's awesome to have someone like Holly in your corner.  She's an amazing person and friend,” says Bob Green. On working with producer Malcolm Springer, Green continues, “Malcolm is such a rad guy, it blows me away someone on his level just texts me to BS, like he's such a genius and I'm honored to work with him.”

The track features guitarist Paul Allen (Adele) and is the first of several songs scheduled for release this year. “Next Full Moon” is available on all digital platforms here: https://linktr.ee/bobgreenmusic

This is just the beginning for Bob Green, an artist you will be seeing and hearing a lot more of in the future.