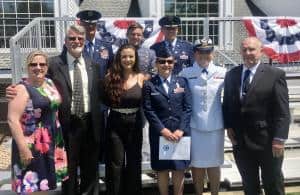 May is Military Family Appreciation Month. Together Dabrowski and her family have over 125 years of combined service to our country. Thank You!

I look forward to the opportunity to spread knowledge and excitement about our newest branch of the Service.”
— Susan (Suzie) Dabrowski (Col. USAF – Retired))

Susie Dabrowski began her career as a missileer and eventually cross-trained into space operations, where she remained until her retirement. For Dabrowski, joining the Space Force Association was simply the next step in staying connected with the space community and sharing the infinite possibilities of space-related fields with guardians and civilians alike. Susie graduated from Embry-Riddle Aeronautical University, Daytona Beach, FL, in April of 1981 (the same month/year as the first Space Shuttle launch). Her passion for space research and exploration led her to accept South East Regional VP position for the Space Force Association. The Space Force Association is the only organization solely focused on supporting our Guardians and both the military and private advancement in the aerospace industry. The Space Coast team and Dabrowski are launching the Space Coast Chapter of the SFA now. It will encompass Orlando and surrounding areas. For more information on the SFA, visit ussfa.org.

"I look forward to the opportunity to spread knowledge and excitement about our newest branch of the Service." Dabrowski continued by stating, "I am blessed to live on Florida's Space Coast and watch launches in person. The excitement about the future of space travel is everywhere, and the local community is proud of its space heritage. I want to share this sense of adventure and excitement with the community and help them to understand the importance of a strong Space Force and other related programs." Her advice to young people interested in military or civil aerospace fields is to choose a STEM core curriculum. She further commented, "Do not limit yourself, and there are endless possibilities in these fields of study and career paths."

For more information on joining the Space Force Association or to find a local chapter, Click Here.

About the Space Force Association:
The Space Force Association (SFA) is the only independent, 501(c)(3) non-profit organization that serves as a professional military association whose sole focus is supporting the United States Space Force, United States Space Command, U.S. national spacepower at large, and our global partners and allies' efforts in space exploration. Its core functions are to research, inform, and advocate to achieve superior spacepower by shaping a Space Force that provides credible deterrence in competition, dominant capability in combat, and professional services for all partners. In addition, the SFA has an essential function to provide support for the men and women of the U.S. Space Force. Membership is open to both military and civilians. For more information on the SFA, please visit ussfa.org.