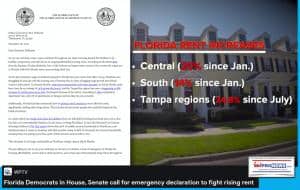 Florida Democratic lawmakers’ letter to Florida Governor Ron DeSantis asking for “State of Emergency” Declaration during affordable housing crisis. Notice: in many browsers and devices you can click image and follow prompts to Increase image size. 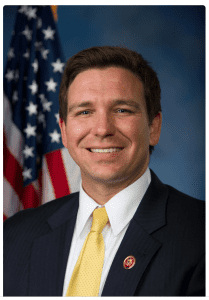 FL Gov Ron DeSantis pointed to his admin’s funding of affordable housing. But HUD officials explains why DeSantis’ plan won’t solve the issue. Competing claims are examined with an actionable plan that could solve the crisis swiftly with no new taxes or legislation.

Swift Relief Possible for Housing Crisis in Florida and Beyond Because No New Legislation or Spending Required, per fact- and evidence packed op-ed in TampaFP

studies find land-use regulations that limit the number of new units that can be built or impose significant costs on development through fees and long approval processes, which drive up housing costs”
— HUD PD&R researchers Pamela Blumenthal and Regina Gray.

TAMPA, FLORIDA, UNITED STATES, February 15, 2022 /EINPresswire.com/ — On 12.16.2021 Florida Democrats asked Florida Governor Ron DeSantis to declare a “State of Emergency” due to the growing affordable housing crisis. As background to the controversy spotlighted in a new op-ed published in the Tampa Free Press, the following facts illustrate the competing political claims.

“Florida welcomed 220,890 new residents from other US states between July 2020 and July 2021,” said QZ. Conventional housing prices and rental costs jumped sharply as a result.

With an estimated 2 million undocumented migrants having crossed the southern border with Mexico in 2021, natural U.S. population growth, plus legal immigration, all add pressure to the inadequate supply of new housing coming online. The New York Times said on 2.5.2022 that in “The latest report, from the Census Bureau's population estimates program, showed a net gain of 244,000 new residents from immigration in 2021…”

That means that logically, Florida Democrats have raised a valid concern. That noted, as a fact-packed and evidenced linked new op-ed published by the Tampa Free Press (a.k.a. TampaFP or The Free Press) on 2.13.2022 reveals neither the plan advanced by Democratic lawmakers or the position taken by popular Florida Governor Ron DeSantis (R) in response will solve the growing problem.

Indeed, if there is no rapid and pragmatic solution advanced, the plain math reflects that the problem will only get worse.

But there is a possible silver lining for affordable housing seekers, affordable housing advocates, public officials, investors, and others. That’s found in the “The Tampa Free Press “Op-Ed: “State of Emergency” – Democrats, Gov. DeSantis And Competing Affordable Housing Crisis Plans And Solutions Examined.” That's possible by applying lessons learned from HUD, nonprofit, and other research that is cited in the new Tampa Free Press op-ed.

The subheading teases the possible good news: “Swift Relief Possible Because No New Legislation Or Spending Required." If that sounds too good to be true, the column details the facts and cites the laws and evidence.

To the point raised by Florida Democrats, the video by the Manhattan Institute at the end of this press release explains in 50 seconds why rent control historically has failed to work in practice. What those Florida Democratic lawmakers are proposing is essentially an “emergency” form of rent control. Indeed, in several parts of the nation, developers, and rental housing providers end up suing public officials who impose rent control. That means added costs to taxpayers who have to pay the costs of defending against such litigation. Further, that legal battle over rent control also means that once new construction or development takes place, the investors have to add into costs spent on litigation into any approved new construction. While the results of such rent control cases can take years and have cut both ways, ‘rent control’ is far from a sure thing.

Bottom line? Housing costs more at the end of such legal battles over rent control, which city or other officials may lose. So much for the Florida Democrats plan.

That noted, a nonpartisan path ahead exists.

The TampaFP op-ed provides a range of evidence from various federal, nonprofit, university, and other research that demonstrates why decades of policies advanced by both major parties have failed to solve the housing crisis. The proof is self-evident, as the affordable housing crisis is getting worse, not better.

Among those cited in the report – which includes a proven solution that doesn’t require new legislation or taxpayer spending – are the following sources for information and pull-quotes.

The facts-, evidence-, and opinion-based column is found on the TampaFP.com website, found at the link below. The article is found at this link here.

The plan takes advocated in the op-ed is nonpartisan. It has a history of both Democratic and Republican support for the law cited. The key to the concept is that no new spending or legislation is required. How is that possible? Doesn't that sound 'too good to be true?' No, because existing laws have already been enacted by widely bipartisan margins, as Weiss said. Existing law and a proven solution could be applied to swiftly address the needs and crisis without more taxpayer spending. It would also bring fringe benefits, such as more better paying jobs.

The op-ed asks: who will step up and press to enact this proven solution? Will it be Democrats? Governor DeSantis? Other political leaders? See that and more in the op-ed column entitled "State of Emergency” – Democrats, Gov. DeSantis And Competing Affordable Housing Plans and Solutions." ##