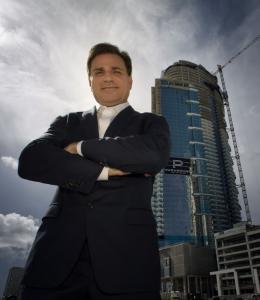 One of Miami’s preeminent condominium construction CEO-Developers; a trustee of the Builders Association of South Florida; and the creator of the world famous 60-story, 700-foot, $600-million Paramount Miami Worldcenter tower, is available for interviews about how architectural technologies, building codes, designs and materials have drastically improved since 1981, when, the now-collapsed, Champlain Towers was completed.

Kodsi is also a trustee of the Builders Association of South Florida, an industry trade group.

Kodsi is one of the lead developers of the 27-acre, $4-billion Miami Worldcenter. It is America’s largest urban core construction project and the nation’s second-largest real estate development. Miami Worldcenter features 11 high-rises, multiple hotels, a new convention center and a 10-block restaurant and retail promenade.

His portfolio of past, present and forecasted projects exceeds $5-Billion.

“Following the category-five Hurricane Andrew in 1992, Florida’s building codes were significantly changed to include advanced designs, construction techniques and materials to insure more resilient and stronger structures,” explains Kodsi. “I anticipate the Champlain condominium collapse will result in immediate code, inspection and other changes, similar to the response following the massive destruction caused by Hurricane Andrew.”

Kodsi explains, “Even before the ground breakings for the aforementioned Paramount-branded buildings, scale models of each structure underwent wind-tunnel testing, construction material evaluations and much more. Some of these tests are required by regulators. Others are self-imposed.”

He adds, “We make our buildings strong and we make them to last. That’s because the technology and education now exists to construct better and safer buildings.”

As examples, Kodsi says, newer projects, such as Paramount Miami Worldcenter, are built with solid foundations that are as much as 10-feet above sea level; include new sewers and drainage systems, highly-insulated subterranean electrical and telecommunications cables; and windows, walls and columns that can withstand 220 mile per hour winds and rain.”

He continues, “Miami’s weather; the heat; the humidity; the reality of hurricanes and the porous limestone on which most foundations are built — these are just some of the factors that are taken into account for the construction of more than 100 new skyscrapers that are sprouting-up in South Florida."

Kodsi agrees with the City of Miami's mandatory order that all mid-rise and high-rise buildings, which are older than 40-years, undergo immediate inspections by private engineering firms, to determine the integrity of the structures.

He concludes, "A lot of the older buildings in the area suffer corrosion. Maintaining these buildings is an ongoing process, which may have been ignored — but not any longer, because America has awakened — like it did after Hurricane Andrew.”