Joe Biden himself said he knew the Russians were going to invade Ukraine. Then why didn’t he take preemptive steps months before? Promoting domestic oil production is being promoted by 3 Democratic Senators, plus hundreds in the GOP. 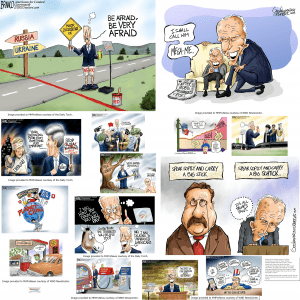 Fact based political cartoons convey in seconds what may take thousands of words to express. These cartoons, provided courtesy of the Daily Torch and/or WND NewsCenter to MHProNews, each speak volumes. 3 Democratic Senators joined hundreds in GOP asking for U.S. Oil. 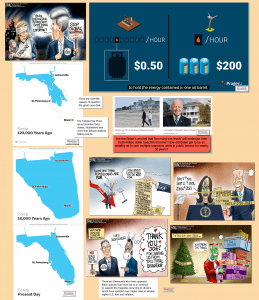 In less than 18 months since the 2020 election, the shift in U.S. policies have resulted in a series of disasters at home and abroad. These have caused Biden poll numbers to plunge, and deposed President Trump’s appeal has risen. NOTE click on images to increase size.

“Politics is a dirty business,” said author Will Shetterly, who added “but if you do not do politics, politics will be done to you.” Says New Op-Ed on TampaFP.

"There's class warfare, all right, but it's my class, the rich class, that's making war, and we're winning." Actually, there's been class warfare going on for the last 20 years, and my class has won.”
— Warren Buffett, NYTimes (2006). Second Buffett Quote Washinton Post 2011.

TAMPA, FL, UNITED STATES, March 12, 2022 /EINPresswire.com/ — A new op-ed on the Tampa Free Press (TampaFP) reveals the costly, problematic, competing and evolving narratives in the U.S. about the Russian invasion of Ukraine. The Russian attack on Ukraine was apparently ordered by oligarch and Russia’s President Vladimir Putin. Former CNN reporter turned WMAL talk radio star Chris Plante has for years referred to Putin as “Vlad the Impaler.” That’s one of the lighter points in the illustrated, evidence-packed information, videos and documented op-ed on the TampaFP entitled: “‘Vlad The Impaler’ – Ukraine, USA, EU, NATO, Oil, Green Energy, Oligarchs, George Soros, Paltering, Affordable Housing 2022 – Costly Facts You Have And Haven’t Been Told.”

MHProNews has supplemented that TampaFP op-ed with updates linked below.

“A Tapestry of Lies” was a phrase used by Nobel prize winner author and playwright Harold Pinter in his acceptance speech in 2006. His enduring insights arguably still apply to political issues. Some pull quotes from Pinter will illustrate that point.

• As a citizen I must ask: What is true? What is false?

• But as I have said, the search for the truth can never stop.

• Objectivity is essential. The characters must be allowed to breathe their own air. The author cannot confine and constrict them to satisfy his own taste or disposition or prejudice.

• Political language, as used by politicians, does not venture into any of this territory since the majority of politicians, on the evidence available to us, are interested not in truth but in power and in the maintenance of that power. To maintain that power it is essential that people remain in ignorance, that they live in ignorance of the truth, even the truth of their own lives. What surrounds us therefore is a vast tapestry of lies, upon which we feed.

A brief pause here should point to how Warren Buffett, Chairman of Berkshire Hathaway (BRK) – which owns Clayton Homes, 21st Mortgage Corporation, and Vanderbilt Mortgage and Finance (VMF) has ironically said something similar to Pinter's claims. These BRK brands are among the Manufactured Housing Institute (MHI) members that are accused by consumer advocates and some public officials of "predatory" behavior.

That noted, let's return to more quotes from Pinter's thesis.

• It’s a scintillating stratagem [used by America’s ruling elites]. Language is actually employed to keep thought at bay. The words ‘the American people’ provide a truly voluptuous cushion of reassurance. You don’t need to think. Just lie back on the cushion. The cushion may be suffocating your intelligence and your critical faculties but it’s very comfortable.

• …millions, of people in the United States itself are demonstrably sickened, shamed and angered by their government’s actions, but as things stand they are not a coherent political force – yet. But the anxiety, uncertainty and fear which we can see growing daily in the United States is unlikely to diminish.

• But sometimes a writer has to smash the mirror – for it is on the other side of that mirror that the truth stares at us.

• I believe that despite the enormous odds which exist, unflinching, unswerving, fierce intellectual determination, as citizens, to define the real truth of our lives and our societies is a crucial obligation which devolves upon us all. It is in fact mandatory.

• If such a determination is not embodied in our political vision we have no hope of restoring what is so nearly lost to us – the dignity of man.

Those points noted, let’s return to the TampaFP op-ed on facts behind the curtain in the war in Ukraine.

That op-ed says, "Governments in the U.S. and abroad often show signs of corrupt behavior. That corruption is what R.F. Kennedy Jr has called a “Kleptocracy."" The video, illustration, and evidence-based report explains that the problems in the U.S. and Ukraine were avoidable.

1. At best, Biden mishandled Putin. Given he knew Putin was serious about invading Ukraine, the time to stop Russia was before the invasion, not afterward. Putin’s no boy scout in the tragedy of the Russian invasion of Ukraine, but neither is Biden.
2. At worst, this is a kind of domestic and international kabuki theater. The Ukrainian people, numbers of Russians who oppose the attack, neighboring nations that are taking in refugees from Ukraine are among the victims.
3. Also among the victims are Europeans and Americans who are paying more for oil, gas, and other energy costs. All other products will rise as shipping costs rise. Biden should have known that oil and gas would shoot up. Why? Because that is routinely what happens during a war when the area of conflict happens to be in an energy-sensitive zone.
4. The rationale for Biden’s cancelling the Keystone pipeline and oil leases should be examined through the lens that every honest investigator uses: cui bono? Who benefits? There are winners and losers from the Biden regime’s energy plans.
5. There are numerous voices on both sides of the green energy and climate change debates. That too merits a closer look that could be done in a follow-up. But it is safe to say for now that it is not just ‘science deniers’ who dispute the green energy claims.

The TampaFP op-ed draws to a close saying that "the 2022 midterms are coming up. We’ll plan to talk about that in the future too. Because: “Politics is a dirty business, but if you do not do politics, politics will be done to you.” Stay tuned to the Tampa Free Press for more in this periodic series.