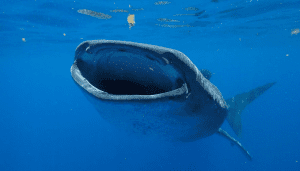 Everyone loves a contest, so we thought this could be a great, fun, engaging way to raise public awareness about the dire status of both these endangered shark species”
— Mahmood Shivji, Ph.D.

FORT LAUDERDALE, FLORIDA, UNITED STATES, July 15, 2021 /EINPresswire.com/ — And the winner is . . . After a nearly seven-month journey spanning more than a combined 29,100 miles, Nova Southeastern University NSU’s Guy Harvey Research Institute (GHRI) has announced the winners of The Great Shark Race 2021 which began in January and ended at midnight on Shark Awareness Day, July 14.

The Great Shark Race 2021 was divided into two races: the shortfin makos, the fastest marine creatures on the planet that can swim up to 44 miles per hour, and the whale sharks, the gigantic shark species, which, not surprisingly, are some of the slowest swimmers. The three racing mako sharks traveled a combined 8,900+ miles.
• Cuddles, sponsored by Penmanship, was declared the victor with 3,207 miles logged, followed closely by;
• Caison, sponsored by Certified Contracting Group, Inc., traveling 3,073 miles, and;
• Fishangler, sponsored by Fishangler App, which finished third with 2,627 miles.

As for the whale shark category, there was an interesting “side race” within the division that pitted NBC national news anchor Lester Holt against NBC reporter Kerry Sanders, who is known for his affinity for sharks. Lester beat out Kerry, 4,718.73 miles to 3,058.14 miles.

As different as they may seem in terms of size and speed, both shark species in the Great Shark Race have something in common – they are endangered. The main goal of this unusual race is to further key scientific research aimed at saving these and other endangered shark species.

“Everyone loves a contest, so we thought this could be a great, fun, engaging way to raise public awareness about the dire status of both these endangered shark species and an effective way to attract sponsors to further fund this long-term research. The announcement was timed to Shark Week when the spotlight shines brightest on sharks,” said Mahmood Shivji, Ph.D., director of NSU’s GHRI and Save Our Seas Foundation Shark Research Center. “From the work we’ve done, we know that both these species can travel up to 12,000 miles in one year so our goal is to use new data to understand where they go when they go and potentially why they travel to these specific locations.”

The latest in ocean wildlife tracking technology was used to measure race results. A fin-mounted SPOT satellite tag on each shark allowed them to be tracked in near real-time on the GHRI Race Tracking Website. These SPOT tags relayed crucial data back to researchers, including the distance that each shark covered as they swam around the Atlantic Ocean, the Gulf of Mexico, or the Caribbean Sea.

The presenting sponsor for each race category were FishAngler App for the makos and The Moss Foundation for the whale sharks. In addition to the companies Certified Contracting Group, Inc., Advanced Green Technologies, Crawford Roofing, Inc., Miller Glass & Glazing, Inc., and Boatyard Restaurant, individual shark sponsors were Penmanship and Gordon James III.

“As we continue the long-term project of working with GHRI researchers at NSU, we learn more and more how important sharks are to preserving healthy ocean ecosystems,” said world-renowned artist, conservationist and scientist Dr. Guy Harvey, chairman of the Guy Harvey Ocean Foundation, which conducts scientific research and hosts educational programs aimed at conserving the marine environment, ensuring that future generations can enjoy and benefit from a properly balanced ocean ecosystem. “The Great Shark Race 2021 was a success and brought in much-needed funds to continue our research. We sincerely thank all who supported us during this race. It is an amazing educational opportunity and a critical research initiative.”

According to NSU’s GHRI research, up to 73 million sharks a year end up in the global shark fin trade, and some estimates say that annually approximately 100 million sharks are removed from the world’s oceans. Case in point: approximately 30% of the mako sharks tagged by NSU’s GHRI research scientists have been lost. These are clearly not sustainable numbers, and it should alarm everyone. It’s why creating awareness about this issue is more important than ever.

About the Guy Harvey Research Institute: Established in 1999, the Guy Harvey Research Institute (GHRI) at Nova Southeastern University (NSU) provides the scientific information necessary to understand, conserve, and effectively manage the world's marine fishes and their ecosystems. The GHRI is one of only a handful of private organizations dedicated exclusively to the science-based conservation of marine fish populations and biodiversity. For more information, please visit: www.cnso.nova.edu/ghri.

About the Guy Harvey Ocean Foundation: The Guy Harvey Ocean Foundation (GHOF) conducts scientific research and hosts educational programs aimed at conserving the marine environment. The GHOF also funds affiliated researchers working to better understand our ocean ecosystem and educators helping to foster the next era of marine conservationists. The GHOF will help ensure that future generations can enjoy and benefit from a properly balanced ocean ecosystem. Follow the GHOF on Facebook, Twitter and Instagram at @guyharveyocean. For more information, visit www.GHOF.org.