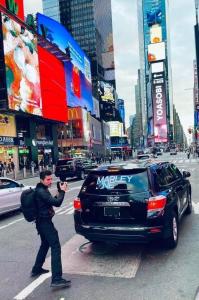 UVertz is taking the lead on overhauling “bumper sticker politics” for the digital age with its street-level “Politics on the Go” platform.

Political slogans, buttons, and bumper stickers will always be a force in the American political landscape. Why? Because they work.”
— John Z. Shafai

MIAMI, FL, USA, June 1, 2022 /EINPresswire.com/ — UVertz is pleased to announce the expansion of its patented, one-of-a-kind digital screen technology to include political campaigns in New York, New Jersey and Florida.

John Z. Shafai, the co-founder of UVertz said, “Political slogans, buttons, and bumper stickers will always be a force in the American political landscape. Why? Because they work. In 1840, William Henry Harrison and John Tyler’s catchy slogan ‘Tippecanoe and Tyler too’ denied incumbent president Martin Van Buren a second term. In 1952, ‘I like Ike’ humanized an otherwise resolute Dwight D. Eisenhower and ushered the General into the presidency. In 2008, the repetitive chant of ‘Yes We Can’ was emblazoned on car bumpers throughout the United States and drove a transformational Barack Obama into the White House.”

UVertz seizes the effectiveness of political slogans, buttons, and bumper stickers, and transforms them to dance digitally on the rear windows of gig-economy cars for a captive audience. Mr. Shafai added, “The UVertz platform taps into the hierarchy by which our brains pay attention to media. It does so by focusing on three unique features: (1) motion, (2) novelty, and (3) unexpected newness. In doing so, the UVertz platform combats the repetition blindness that plagues more traditional marketing campaigns and incumbent media.”

Politics does not lend itself to static advertising and dated messaging. Because UVertz is digital, marketing topics can change with the click of a mouse. Campaigns must be fluid as the day’s events can change on a dime. When that happens, a campaign must harness the speed and alacrity to also pivot and change on a dime.

Khalil M. Dhouti, co-founder and COO of UVertz, explains how dynamic the platform is, “As gig-economy cars are moving through different neighborhoods, ads can also change to speak to a changing audience. Ads can also change depending on the time of day. Parents picking up their kids at school at 2 pm are receptive to different types of political messaging than suits leaving the office at 6 pm stuck in rush hour traffic. As the audience changes, the messaging must likewise change.”

Mr. Dhouti has decades of experience in digital marketing and advertising. Having held leadership positions in Publicis and Omnicom agencies, Mr. Dhouti has overseen agency engagements for such brands as Verizon Wireless, T-Mobile, Johnson & Johnson, Tylenol, Neutrogena, and Listerine. Mr. Dhouti explains, “Whether you’re selling beauty products or political platforms, branding works. A politician must build awareness and name recognition. And with street-level digital media, branding can be followed by Twitter-style messaging that can either change daily or just be repetitively on point. UVertz delivers on both counts.”

The 2022 election cycle will hit a new record for political ad spend at about $9 billion. This is a 130% increase over 2018. A new projection report from AdImpact predicts that Florida will witness the highest political ad spending in the 2022 campaign cycle, totalling $593 million. UVertz’s addition of its “politics on the go” platform embraces the modern version of bumper sticker politics – digital slogans dancing on the rear window of market-driven gig-economy cars for a captive audience of voters.