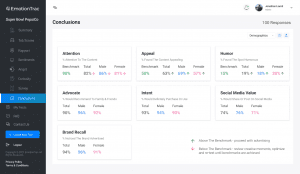 BOYNTON BEACH, FLORIDA, UNITED STATES, January 25, 2022 /EINPresswire.com/ — "Never ever have to deal with flaky buyers again!” is the new and highly entertaining brand pitch for the e-commerce car company, Vroom. Highly styled as a Broadway musical, with a female lead in its execution, the commercial positions Vroom as the solution to combat online car buyers from “flaking out” right before the final sale. The spot promises that partnering with Vroom to sell your car online will virtually eliminate these challenges, and get your deal closed as quickly as possible.

How do viewers respond to this messaging, and will it deliver on converting auto sellers to use the Vroom platform? In our national EmotionTrac study conducted this week, we determined that viewers are strongly enraptured by the highly visceral Broadway-infused musical spot. Scores for our Attention metric are breakthrough – achieving significantly higher metrics than our benchmarks. Indeed, this bold approach to storytelling is a powerful tool in stirring Attention.

Interestingly, the socio/emotional connection between men and cars endures, as evidenced by their higher scores for Brand Appeal, Attention, and Brand Recall. This conventional paradigm, however, ends when it comes to Brand Intent as men are significantly less likely than women to consider using Vroom in the future. So, while the concept of “car selling” can skew male, the probability of them using this tool is very low. Is Vroom not seen as manly enough? Is their “manly” contribution/solution to car selling being threatened or challenged? Further evidence of this conclusion is that men are also far less willing to associate or disclose their brand affinity on Social Media.

Beyond the success of achieving great Attention, however, this commercial does not emotionally connect with the audience, leaving them with little Rapport and Empathy towards the brand. Perhaps it was the style of the presentation, perhaps it was the central female lead, perhaps men found it too “fluffy”. Importantly, this lack of emotional connection with the brand is a red flag. Using EmotionTrac to pre-test creative before launch would have identified the pain points in the commercial, the polarizing effect of the creative, and greater detail regarding where the message is broken and how it could be repaired. EmotionTrac offers an array of metrics and diagnostics to achieve your most penetrating and resonating creative.

“Why wait until after the Super Bowl to find out whether consumers liked your commercial?”; said Aaron Itzkowitz, EmotionTrac’s CEO. “It’s the one day a year where people actually engage in the ads, so it would make sense to test the ads beforehand.”

Shelli Garson, Director of Insights, who has worked in Advertising Testing and Focus Groups for more than 30 years affirmed, “This platform is the deepest diving, most emotionally revealing, economical and quickest way to collect critical quantitative data that informs creative development and placement.”

With $6.5 million being spent on a 30-second commercial during Super Bowl LVI and an average total ad cost of more than $10 million, collecting valuable insights prior to spending significant advertising dollars is critical to the success of any ad campaign. Upon completing a test with EmotionTrac, the advertiser holds the critical insights as to whether to proceed with advertising as is or to review, optimize and re-test until they achieve optimal results.

About EmotionTrac: www.emotiontrac.com/why
EmotionTrac, which developed an AI Facial Coding Analysis platform, performed an independent test of the Vroom ad using their CampaignTester mobile app. The panel audience, consisting of both men and women equally, has them opt-in to allow the front-facing camera of their device to collect their subconscious Emotional reactions to the commercial content. EmotionTrac then interprets the micro facial expressions using an array of 20 different sentiments collected, by frame. Beyond capturing authentic Emotional Intelligence, the tool also reports Appeal, Brand Recall, Attention, Brand Intent, Humor, Social Media Value, and Curiosity, among other key metrics.