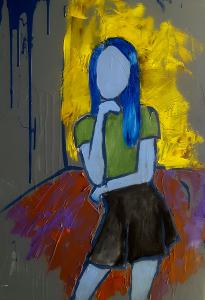 I put my emotions, thoughts, etc., on canvas, and in that sense, every painting I do is autobiographical. I use oil, acrylic, mixed media, whatever it takes to get my message across.”
— Ric Conn

MIAMI, FLORIDA, USA, December 1, 2021 /EINPresswire.com/ — Ric Conn is an internationally known award-winning expressionist artist who is a leading voice in women's inequality and social issues. In 2020 his message crossed the globe for his visual dialog for female empowerment. He has been featured on Fox, CBS, ABC, Medium, The New York Weekly, ArtTour International Magazine, and Toscana Cultura in Italy, among other numerous media outlets.

Conn presents a thought-provoking visual narrative with bold textures, masterful use of light, and symbolic imagery. He explores the opposition between reality and perception. His fascination and motivation are amped by realities that appear invisible in our everyday lives, cutting into the core of his subjects' hearts and exposing hidden emotions. Layers of female forms are captured in each of his paintings, focusing on the essence of women's courage and beauty."

Conn's dedication to speaking out against inequality and social issues women often face is evident not only in his work but in his platform. He displays a clear opposition between reality and perception, utilizing a relatively conventional technique while painting, employing acrylics, inks, oil, gouaches, and charcoal to bring the various depictions to life. In addition, Conn often incorporates symbolically designed animal motifs throughout each canvas while still using muted and soft palates, allowing them to focus on the main subject.

With his focus on Equality and empowerment, Ric Conn creates works that reach across language barriers to reveal the psychological connection between our world and the world that he portrays. In his work, the female silhouette is an expression of women's souls and limitless emotions—all the while revealing the meanings of the existence of our universal connection as humankind.

In the words of ATIM CEO, Viviana Puello "We're excited to bring Ric Conn's work to our booth this year! Ric Conn's artworks are endowed with shadows, light, contrast, and depths. He uses these aspects to portray his ideas and achieve different layers of creativity. He can tap into various views and expressions of sexuality, with a welcoming invitation to eliminate stereotypes on what a "woman" must embody to be accepted by society. With a lengthy career and a well-deserved line of awards, Ric Conn makes his mark in the community, and we're looking forward to sharing this with our audience in Spectrum Miami. Stop by Booth#503 and check out his works," Concluded Puello.