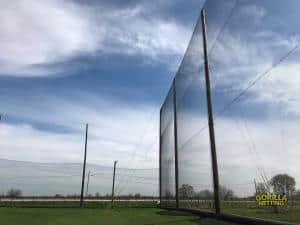 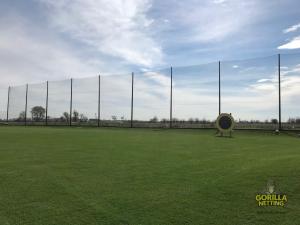 The newly replaced driving range netting system featuring a much cleaner look with the new netting and down guy replacements.

Weather And Poor Craftsmanship Contributed To The Damaged Netting System

Sugar Grove Golf Center in Sugar Grove, Illinois, was the casualty of harsh weather and poor craftsmanship by a previous netting contractor. Although the previous netting system was in place for quite some time, it’s remarkable that more dangerous issues didn’t present themselves before being addressed.

Sugar Grove Golf Center awarded a bid to replace the netting panels on their driving range to Gorilla Netting, a Florida-based netting contractor. Once a crew arrived to begin replacing the weathered and deteriorated netting, at the height of the netting system, 65-feet up, crew members were stunned to find severely damaged hardware, missing hardware, broken cables, and rotted push poles braced to individual support poles with only thin angled metal strips.

The new driving range netting, hardware, and down guys installed by Gorilla Netting gave the driving range a much fresher look and removed many hazards in the process.

You can learn more about Gorilla Netting by visiting their website: https://www.gorillanetting.com. For more information, contact Dolvin Todd at info@gorillanetting.com or +1 (800) 274-1079.