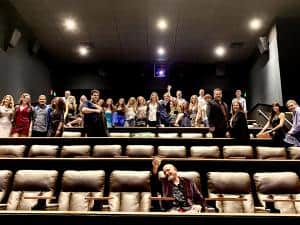 The award-winning cast and crew of Corona Camp went by the book to follow industry guidelines during the pandemic.

MIAMI, FLORIDA, UNITED STATES, May 26, 2022 /EINPresswire.com/ — As the Hollywood film industry shut down in the spring of 2020, a south Florida-based group of award-winning actors and crew came together to make the first feature film in Florida during the COVID pandemic – all while following FilmFlordia.org COVID-19 guidelines and creating a strict safety bubble for all those involved. As a result of the team’s dedicated work, a comedic campy murder mystery film, Corona Camp, was born.

To ensure the success of the film, Victor Nappe, director and owner of Chaos Made production company, reached out to notable actors and their families who he knew were strict in their quarantining efforts. Once his team was assembled, Nappe created the first bubble movie set at a private 100-acre campsite in Central Florida. Families moved into 12 cabins on site to escape the realities of shut-down South Florida and make a movie. The director and father of two teen actors wanted to memorialize this strange and unique time in history with his family by engaging creativity.

"Get the best talent you can, give them a storyline, and let it evolve." said Nappe. "We started filming with a great storyline and worked on scripts the night before shooting – it was total chaos. But in the end, what made the movie so great was that I was able to pull together such talented actors, many of whom I'd worked with pre-pandemic. We all wore many hats, and it worked! We filmed a damn good comedic mystery in just 21 short days!"

Hopefully, with the height of the pandemic now in the rearview mirror, Nappe believes this is the right time to share the Corona Camp movie with the world. However, this is easier said than done, especially when trying to share comes another big hurdle – distribution. According to Nappe, the film industry changed a lot during the past two years and so has film distribution.

“I didn't feel like going down the path of traditional film festivals as I simply wanted to get this movie out to my target audience – teenagers. It was actually my kids who suggested I go on TikTok to release it as a ‘summer blockbuster in weekly chapter drops,” said, Nappe.

"Corona Camp is the first feature film to prove that great movies can be made using alternative methods, surpassing the paradigm of past filming,” states Nappe. “As creatives in the entertainment business, above all else we had to keep creating and figure out how to entertain ourselves and others!"

For more information, please contact victor@chaosmade.com and be sure to follow to the @CoronaCampMovie on TikTok to experience this epic event and connect to a story humankind can all relate to.

Corona Camp takes place at a camp for celebrity/wealthy kids that needed to be kept safe and secure during the global Corona pandemic lockdown. After arriving, the kids learned that no expense was spared when a world-renowned spiritual leader was enlisted to help the kids deal with the reality of this "new norm." The kids learn what camp life is like, or what they think camp life should be, until a mysterious accident occurs.