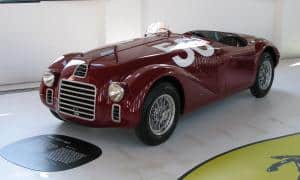 Learn more about the history of the Ferrari brand

Easily recognized by its vibrant red color and Prancing Horse (Cavallino) logo, Ferrari is an Italian luxury automaker that is admired for building some of the world’s fastest and finest supercars. With a net worth of more than $30billion and an outstanding record of the highest number of driver’s championship wins, Ferrari remains the most valuable luxury brand in the world. They represent power, speed, wealth and we would definitely stare if we see one across the streets! But how much do you know about the origin story of this famous automaker? Well, let’s dig in!

The Origin – 1939 -1959
Founded in 1939 by Enzo Ferrari, Ferrari was originally launched as a racing operation before becoming a car company. This is because Enzo used the sales of the Ferrari cars to fund the racing operations of the company. After he was rejected by Fiat due to no available employment space, Enzo switched to Alfa Romeo where he worked for 10 years. By 1929, Envo launched Scuderia Ferrari aka “Team Ferrari” which allowed gentleman car drivers to compete in races, and in 1933, Scuderia Ferrari became Alfa Romeo’s racing division.

Enzo shut down Scuderia Ferrari to head Alfa Romeo factory racing operation – Alfa Corse in 1937, but later left there to start Auto Avio Construzioni in 1933. This newly formed company built Ferrari’s first car Tipo 815 in 1940. But Enzo was prohibited from using the Ferrari name on race cars or races for at least four years because of an incomplete deal between himself and Alfa Romeo – although he was allowed to use the Cavallino logo on the cars.

Ferrari’s story officially began in 1947, after Enzo built the signature V12 engine that was used for the first Ferrari-badged car, Ferrari 125 S. The 125S debut was a “promising failure” according to Enzo Ferrari that the rider had to pull out of the race due to an issue with the fuel pump. But after 4months, 125 S came back with a bang and went ahead to win 6 out of the 13 races it participated in. By the late 1940s, Italian-born successful racer Luigi Chinetti introduced Enzo to the idea of building sports cars for the public since he was already using the Ferrari cars to win races around the world. He was also the first to import Ferrari into the U.S and by 1950, Luigi opened the first U.S Ferrari dealership in Manhattan, before relocating it to Connecticut.

The Success – 1960 – 2009
In the 1960s, Ferrari was widely recognized for its impeccable car performance both on and off the race track, and this lead to more patronage as the brand grew from manufacturing 80 cars in 1955 to over 300 cars annually in 1960. The ’60s was a pretty good year for Ferrari as it became a public corporation under the name SEFAC s.p.A (Societὰ Esercizio Fabbriche Automobilie corse) and Phil Hill also won the Formula 1 championship using the 1.5-liter V6 engine. With the looming financial troubles of Ferrari, Enzo attempted to sell the company to Henry Ford II of Ford Motor Company. But Ferrari walked out of the deal and in 1969, 50% of the company shares were sold to Fiat.

In 1988, Enzo Ferrari handled the launch of the Ferrari F40 which was used to commemorate the company’s 40th anniversary before his death that same year. F40 was built with a carbon-fiber body, giant wings, and Kevlar panels. After the death of Enzo in 1988, his son Piero became VP and Fiat shares of Ferrari rose to 90%. Ferrari still made smaller engines like the V8 and the production of Testarossa continued till the mid-90s. In 2003, the company produced the Enzo Ferrari F60, a 260-mph supercar in honor of its founder and was the fastest model of the Italian automaker at that time.

Rapid Expansion – 2010 till present
The new millennium opened a new decade of rapid expansion as the FCA group announced its separation from Ferrari to make it an independent brand in 2016. Ferrari was also rated the world’s most powerful brand by Brand Finance in 2014 and by 2018, the 1963 250 GTO became the most expensive car in history setting an all-time selling record price of $70million.

Over the past seven decades, Ferrari has come a long way from its first start as a race car builder to building its first Ferrari-badged 125 S and 218 other supercar models for both track and street driving. They have expanded from manufacturing automobiles to licensing and selling a variety of merchandise like clothes, toys, accessories and currently have up to 30 Ferrari boutique stores around the globe – including a Ferrari themed amusement park. One thing you should know is that Ferrari limits the annual production of its luxury cars to preserve the exclusivity and originality of the brand