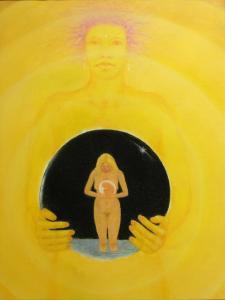 Kimberly Berg's works showcasing at the ArtTour International Magazine's Booth 503 of Spectrum Miami are causing quite an impact.

I wanted to preserve the freedom to create whatever inspired me. Eventually, that led me to concentrate on drawing the human figure.”
— Kimberly Berg

MIAMI, FLORIDA, USA, December 4, 2021 /EINPresswire.com/ — The art world comes to Miami this week, and Spectrum Miami shines a light on the most relevant art in the world, with both international and local artists gracing its gallery walls. Spectrum features Kimberly Berg from the US, with his mesmerizing artworks at the ArtTour International Magazine's Booth, and the public is enjoying impactful works of a profound message. His paintings are causing a significant impact.

Kimberly Berg grew up in Wisconsin. He has stirred the old goddess! A male pro-feminist craftsman, Berg's work challenges the patriarchal framework that has advanced to rule our world by uncovering it as a framework that is not as it were unworkable and unsustainable but moreover unjust. Guided by the ancient record, which appears to prove that pre-patriarchal Neolithic social orders regarded and honored their ladies, Berg accepts that we are drawing nearer the tipping point of patriarchal dominance as ladies pick up the certainty to recover their inborn bequest. And to be beyond any doubt, a women's activist change is underway. Berg has hurled the ultimate stones vital to tip the scale by propelling a campaign to teach the open on the history of women's culture and the components that driven its terrible oppression.

In the words of ATIM CEO, Viviana Puello "The best thing about attending art fairs is meeting artists in person and feeling their passion for art! Everyone needs an escape from their daily routines- In today's busy world, it has become increasingly difficult to slow down and take a break from your typical routine. Art plays a vital role in reflection and contemplating your next move to live's important decisions.

That's why ArtTour International was created: to help support and grow art culture around the globe by providing Artists with better exposure and opportunities that otherwise would be impossible to obtain alone. Art will always remain an essential component in our lives as it allows us to see beyond just what we see with our eyes; there are many worlds within one work of art!" said Puello. We're excited to bring Kimberly Berg to our booth. "Concluded Puello.