Evolution of Factory-Built Housing. From Trailer House (1930s) to Mobile Homes (circa 1950s to mid-1970s) to manufactured housing and finally modern Manufactured Homes. 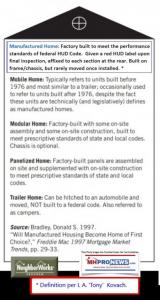 Definitions and terminology for factory-built housing are not interchangable. Mobile home, manufactured home, modular housing, and trailer house are all distinctive terms with legal meanings. 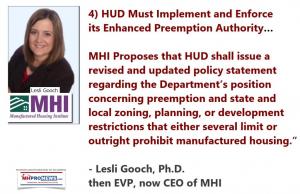 Due to the lack of effective representation at a national level, the MHCA withdrew its membership from the national association [i.e.: MHI] to pursue other avenues of representation.”
— Neal T. Haney, President, Manufactured Housing Communities of Arizona.

POINCIANA , FLORIDA, UNITED STATES, January 10, 2022 /EINPresswire.com/ — Millions believe mobile and manufactured homes ‘depreciate’ – true or untrue? New and previous research reveals a surprising answer. It’s both. Factory-built or manufactured housing increases or decreases in value for similar reasons as conventional single-family housing. LendingTree research by senior economic analysist Jacob Channel indicates throughout much of the U.S., mobile and manufactured housing appreciation has been at a greater pace than conventional housing. During a widely proclaimed affordable housing crisis, the findings are compelling because a new manufactured home may be roughly half the construction cost of single-family housing. Because of the federal construction and consumer safeguards built into the Manufactured Housing Improvement Act of 2000 (MHIA), those buying a HUD-regulated manufactured home enjoy similar or greater protection than the purchasers of more costly conventional housing.

It is not a given that a mobile or manufactured home will go up in value. For those who recall the housing and financial crisis of 2008, know it isn't a given that conventional single-family housing, condos, or townhouses appreciate. The good news is that experience and research from multiple sources reveal the causes of appreciation or depreciation. Some factors can be influenced by homeowners.

A new report on Manufactured Home Living News (MHLivingNews.com) provides the facts and evidence for affordable housing consumers, media, public officials, and researchers to consider. Beyond those insights?

Even if depreciation occurs, it isn’t necessarily bad news. Citing a 2008 article: “In short, depreciation in manufactured homes are neither inevitable nor is it necessarily a tragedy if it does occur. What’s needed are the facts and a good plan. With the right information, you can make a housing decision or investment that will yield a host of potential benefits, from lifestyle advantages to financial ones, less stress and beyond.”

One of several eye-opening revelations could stun millions. Channel’s research, while the most up-to-date, isn’t ‘new.’ Several 21st century studies documented manufactured housing appreciation. That includes research cited by HUD, FHFA, the Urban Institute, other nonprofits, and universities. Several are cited and linked from the MHLivingNews article.

Why hasn’t the Manufactured Housing Institute (MHI) published or promoted LendingTree’s research? During an affordable housing crisis, isn’t it commonsense for MHI to make such facts widely known?

A controversial member of MHI – one accused by his residents of “predatory” behavior, Frank Rolfe – has previously ripped the trade group for failing to tell good news as well as missing the opportunities to properly address problematic reporting.

Tim Williams, former MHI Chairman and the current president and CEO of 21st Mortgage Corporation said: “there are good arguments that we [MHI] should respond to every story, refute every [problematic] statistic, and make our case to the public.” That reasonable statement was to MHProNews. That same message from Williams announced MHI would hire a public relations professional. But years later, Rolfe’s comments appear as valid now as previously.

The Manufactured Housing Association for Regulatory Reform (MHARR) and two former MHI affiliates called for a new post-production trade group because of what Neal Haney called “a lack of effective representation at the national level.” MHARR and MHI have both said that the MHIA provides “enhanced preemption" for manufactured housing over local zoning. Controversies are explored and linked. ##