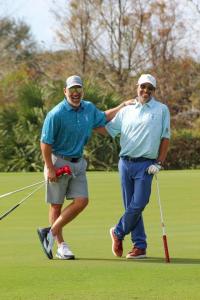 GolfPutz, a golf scoring app, has recently been approved by Kickstarter and is quickly approaching its goal.

As the PGA is currently stating, we need to grow the game and if we can have even a small part in
that we see it as giving back to a game that has given us so much”
— Rick Rapp

Recently approved for a Kickstarter campaign, GolfPutz is designed and created by golfers for golfers to 'make golf fun again'. As many are either leaving the game or simply not interested in learning or participating in the game of golf, GolfPutz has created and released a scoring and gaming app for all to enjoy on the golf course whether a scratch golfer or a 30 handicap. By taking the focus of score out of the game, GolfPutz implements their 'PutzCards' challenges to bring a bit of zaniness and wackiness to the course. GolfPutz adds a humorous yet skillful twist to the “stodgy” golf game with its embedded PutzCard game. Using the app, players can send challenge cards to other players in the group. Players then either show off their skill by pulling off the shot or fail and have the whole group laughing. And later, their friends laugh too when they see the pictures and videos posted on social media. This virtual play holds the potential to grow interest in the game way beyond the course. Simply put, GolfPutz brings originality and viral level fun to the game.

Added to this is their proprietary algorithm which allows multiple players to score common games like Nassau, stroke and match play as well as other lesser-known games like wolf or swing sixes. Gone are the days of guessing how to correctly score a Nassau or how Wolf really works, the golfer simply enters his or her score and the algorithm does the rest, while automatically updating the opponent's leaderboard on their personal device.

“We are thrilled to bring a new style of golf to today's market and look forward to making golf fun again. As many have witnessed on the European tour, with games like ‘The one club challenge’, bringing wackiness to the course can and will grow the game by attracting those who simply want to have fun and have no interest in playing their fathers ‘old boring game of golf”’ said Rick Rapp, CMFO of Rambler Golf, GolfPutz's parent company.

The Golf Putz platform allows users to play any style of golf they like. Don't want the zany and crazy round? Simply select stroke play with no cards or animals and Golf Putz is now a simple and easy to use scoring tool which can be used for standard play. Getting bored on the course and want to set up some laughs? Edit the game mid round and add a few PutzCards to the round, like the ability to ‘steal your opponent's drive’ with the ‘Car Jacked’ card. It’s sure to bring laughs to the group.

Golf’s an $84 billion a year business, making it larger than the motion picture, spectator sports and the newspaper industries. It’s estimated that there are over 30,000 global facilities and over 565,000 golf holes with over 70% located in the US. The global golf equipment market had sales of$8.2 billion in 2016, and is expected to reach $9.7 billion by 2023, a 2.4% CAGR. The sheer size of these markets present an attractive opportunity. Rambler Golf, creators of GolfPutz think they can take a “slice” of this Golf pie with their focus on capturing an under served younger audience.

Miller and Rapp state their goal is simple — to bring more fun to current golfers while also
attracting new and younger golfers to the game who may not have a current interest in teeing it up. “As the PGA is currently stating, we need to grow the game and if we can have even a small part in that we see it as giving back to a game that has given us so much”.