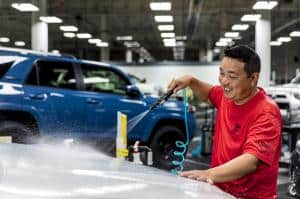 We appreciate the entire JAXPORT team for their business-forward thinking and their focus on our continued partnership.”
— Southeast Toyota Distributors Group Vice President Casey Gunnell

The agreement is for 25 years with three additional five-year renewal options. The public-private partnership includes a nearly $180 million lease with JAXPORT and an additional $16.5 million from SET to modernize the Blount Island terminal. The Florida Department of Transportation (FDOT) will also provide a $16.5 million grant to assist with terminal development.

"This public-private partnership is an example of FDOT’s continued investment in the state's transportation system," said Florida Department of Transportation Secretary Jared W. Perdue. "This type of collaboration helps market Florida's world-class infrastructure to the world, bringing more jobs and businesses to our state while maximizing the return on the investments we've made for the citizens of Florida."

Terminal upgrades at Blount Island include two state-of-the-art processing buildings and associate work areas totaling more than 250,000 square feet, as well as the addition of new on-site rail connections and truck loading areas. SET will remain at its current Talleyrand location until construction on the new facility is complete in late 2024.

“We appreciate the entire JAXPORT team for their business-forward thinking and their focus on our continued partnership. We are excited about this new facility, which will provide our dedicated associates with modern amenities while also increasing production efficiencies to serve our dealers,” said Southeast Toyota Distributors Group Vice President Casey Gunnell. “We are bullish on Jacksonville’s business climate, including ongoing diversification and development, and the availability of a skilled labor force looking to join our growing organization.”

SET has been operating at JAXPORT for more than 50 years and is one of the port’s longest-standing tenants.

In 2021, SET moved approximately 157,000 vehicles through JAXPORT. The company’s Jacksonville operations support more than 800 jobs, including processing, parts and distribution, and technical support and training.

“Last year, five of the nation’s 15 best-selling vehicles were Toyotas, many of which move through JAXPORT, including the country’s best selling mid-sized pickup, the Toyota Tacoma,” said JAXPORT Board Chair Wendy Hamilton. “Despite global supply chain challenges impacting the automotive industry, SET has increased the efficiency of their operations to meet dealer needs, a reflection of the strength of their leadership team and workforce.”

“We are proud that a company of this stature continues to grow its footprint in Jacksonville,” said JAXPORT CEO Eric Green. “This public-private partnership, along with the investments being made in the terminal by FDOT, allow us to build on our position as one of the country’s top vehicle-handling ports and meet the growing demand for vehicles in Florida and throughout the nation.”

JAXPORT is currently negotiating with a global vehicle manufacturer for use of the 50 acres at Talleyrand which will be vacated by SET. The property offers a dedicated vehicle berth with a 200,000-square-foot auto processing facility.

About Southeast Toyota Distributors LLC
Southeast Toyota Distributors is the world’s largest independent distributor of Toyotas. The company distributes vehicles, parts and accessories to 177 Toyota dealerships in Alabama, Florida, Georgia, and North and South Carolina. Dealers in this region sell approximately 20% of all Toyotas sold in the country. Headquartered in Deerfield Beach, Florida, its vehicle processing facilities are located in Jacksonville, Florida and Commerce, Georgia.

Southeast Toyota Distributors is a subsidiary of JM Family Enterprises, Inc., a privately held company with $18 billion in revenue and more than 4,500 associates. JM Family has earned various awards for its culture, products and services, including 24 consecutive years on Fortune’s 100 Best Companies to Work For list. Interact with JM Family on Facebook, Twitter, Instagram and LinkedIn.

About JAXPORT
Located in the Southeastern U.S. at the crossroads of the nation’s rail and highway network, JAXPORT is a global gateway to Florida, the nation’s third-largest state. Jacksonville is Florida’s largest container port and one of the nation’s largest vehicle-handling ports. The port offers no harbor or terminal congestion with same day access to nearly 100 million consumers. JAXPORT offers shippers seamless transportation via 100 trucking firms and 40 daily trains via Class I railroads CSX and NS and regional rail line FEC.