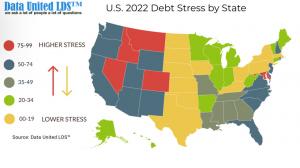 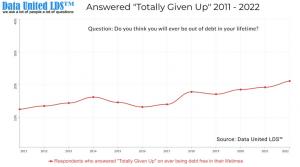 21% of Americans feel zero hope of ever being debt free

A surprising finding from GOP voters with a history of prizing personal responsibility.

I wanted to know how much debt stress is out there. From State to State, ocean to ocean, I wanted to shed light on their plight. I've been bankrupt myself – it was scary and soul crushing.”
— Catherine Dean

MIAMI, FLORIDA, USA, May 5, 2022 /EINPresswire.com/ — In a recent Data United LDS™ survey on debt stress in the United States, there was a surprising data point in the political demographic.

While at the same time, Republicans expressed they accept the least amount of personal responsibility for their personal debt woes.

This data point surprised all on the Data United LDS™ team who claims to be politically neutral with a mix of Apolitical, IND, GOP and DEM leaning team members. See all key findings, interactive data, graphs, and maps here: https://localdebtservices.com/stress-from-debt

"Out of all the data points coming out from our 10+ year study, I would say this is one of the most surprising. I come from a family of staunchly conservative voters going back three generations. I had to review the data a few times while I scratched my head. This flies in the face of my family's beliefs and everything our party has stood for since….I don't know….forever."

Other studies coming out from the project show how much debt stress American's feel from State to State, with an interactive map for presentation.

Another problematic data point coming from the study showed 21% of respondents said they’ve given up hope they will ever be debt free.

According the 2020 U.S. Census * the adult population is now over 258.3 million, meaning over 54.24 million American adults feel no hope of ever achieving financial freedom. 21% is 3 points higher than findings from the 2014 survey conducted by CreditCards.com **, where 18% of respondents said they had no hope of achieving debt freedom in their lifetime.

The study on gender shows a big uptick in debt stress for women in 2022.