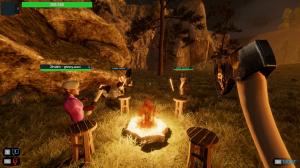 The metaverse has been making waves in the game industry. Showing no signs of slowing down three friends decided to ride the wave and create a metaverse themselves, which CEO Daniel Knott and his team did. Immersys is different from other metaverse because its platform utilizes blockchain technology to offer players ownership over digital assets and gameplay to allow users to build and collect a variety of collectibles on the blockchain.

“Integrating the WAX blockchain into our platform was a no-brainer,” Knott said about his choices in the inventory blockchain network. Using WAX blockchain allows users to set up a wallet address with ease. The entire network features a zero fee for the peer-to-peer transaction, making it the perfect choice for Immersys highly interactive metaverse. Knott and his team needed a server that could endure the scalability that Immersys was going to have upon launch. With Unity and its cloud computing and multiplayer networking servers, it will allow Immersys to have AR and VR capabilities on launch.

But the essential part of any game, especially NFT games, is what is in it for the players. Immersys is a creator-centric platform allowing players to create and own their creations. The in-game tokens are called FATE tokens. FATE tokens is the platform’s utility token earned by players using resources while playing. In addition to owning the digital assets, players can permanently own land in the game, meaning they can make more from playing more. And, of course, there is the customizable avatar that every player in Immersys will have, showing off your personality within the game.

The future of NFT games is here with Immersys. With a maximum of 18 billion FATE tokens, the FATE market capitalization value will skyrocket, considering roughly 182 million tokens are currently in circulation. On the horizon for Immersys is the combat skill-based gameplay for the platform, which will bring the gaming experience to another level with battle royals, first-person shooters, and dungeon boss game modes soon to come.