Advocating for the ‘Discarded and Forgotten’ 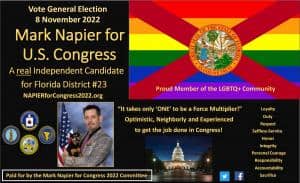 Mark Napier for Congress Slogan, Values and Experience with CIA and U.S. Army 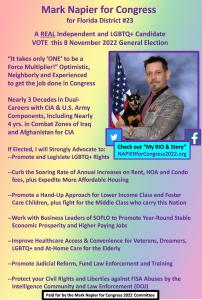 I want to extend salutations to the LGBTQ+ community family wishing everyone a safe month of celebration and festive memories. Happy Gay Pride Month and Stonewall Day!”
— Mark Napier

FORT LAUDERDALE, FLORIDA, UNITED STATES, June 8, 2022 /EINPresswire.com/ — Mark Napier, a ‘real’ Independent and LGBTQ+ Candidate for Florida District 23 (formerly District 22) is seeking his first bid for Congress for the General Election scheduled for 8 November 2022. Napier filed for candidacy on 5 February 2022 and formally declared his candidacy on 18 May. Napier successfully applied to qualify to have his name placed on the Florida Division of Elections' ballot.

According to Napier…"This is a time for change!" To date, Napier continues to demonstrate that he is an Army of ‘ONE’ acknowledging as a low-income candidate who was homeless up until 2015, that he has his sights set high. "It takes only ‘ONE’ to be a Force Multiplier! 'ONE' being Optimistic, Neighborly and Experienced to get the job done in Congress!”

In recognition and celebration of Pride Month, Napier reflects that…“I am honored to be running for U.S. House of Representatives in Florida District 23 (formerly District #22) as an LGBTQ+ Candidate. The LGBTQ+ and other communities across SOFLO are under assault by the ‘Powers that Be’ from both the left and the right who are so out of touch with the people at the bottom dealing with economic hardships that it’s not even funny."

Napier continues …"Together we must find common ground and work together rather than promote the ‘Slap and Tickle Politics’ seen daily in Washington.” Inflation, a looming recession and other outside influences is making life tense. That is why Pride Month is so important. We are not alone–together. Acceptance, respect, openness and solidarity of being shoulder to shoulder makes us strong."

Napier says though he will call on President Biden to declare the anniversary of Stonewall–28 June–to be officially recognized as a national holiday, but Napier admits that is a hurdle that would remain to be seen. The month of June is considered a month of celebration for the LGBTQ+ community, but it was the 28th of June that events of Stonewall became the bedrock foundation for which the LGBTQ+ rights began to take shape and grow. Just as June 19 [Juneteenth] is celebrated for the emancipation of enslaved people following the end of the Civil War, 28 June represents the liberation of the LGBTQ+ community who were otherwise forced to remain closeted fearing retribution. Napier says…“That is why I would call for Stonewall to be officially recognized as a national holiday as it includes all spectrum of ethnicity across our nation, regardless of age, affluence, and disabilities. Even barriers to languages, political and yes even religious acceptance are represented in the LGBTQ+.”

Napier reflected that Pride month is a holiday of acceptance of one’s own self [Pride] and recognition by others to live and let live. Napier does concede that there will always be those that want to throw a wrench into the works, but the LGBTQ+ Community have overcome many barriers and faced a good deal of discrimination, retaliations and are impacted the most regarding poverty. “A national holiday would be well deserved.”

Napier reflected on his own experience when he was first diagnosed with HIV…“On a personal level, I am grateful for being accepted into the LGBTQ+ community when doors were closed, and I was treated as an outcast during the Great Recession in 2009. Among a series of catastrophic events, I had been hatefully ambushed over the phone by the Army Reserves that I was diagnosed with HIV. It was not long after that I would be forced into the streets bankrupt not just financially, but physically, mentally, spiritually, and emotionally. As time went on, I gradually became an ‘abandonment of self’ – in worth and esteem. The transition from living in a white house to living beyond an outhouse on the streets chronically homeless for five years was decimating at best. In 2015, with perseverance and fortitude I pulled myself off the streets and now I am running for office.”

Twenty-five percent of the American population–accumulative–are low income, impoverished or homeless according to the U.S. Census Bureau (2020). As of 2022, those living in poverty account for 11.4% (1) and the homeless represent .2% (2) of the American population or almost 553,000 people. Florida is third (3) in line for homelessness among states. The LGBTQ+ community is hardest hit by poverty at 22% (4) of which Transgenders account for 29.4% (5) within the community. Additionally, of the children that represent 20% of the homeless population, 42% (6) of the youths are homeless due to being rejected by their families because of their orientation.

Napier reflects…“This is why I am advocating for the ‘Discarded and Forgotten’ in my campaign. A ‘Hand-Up’ approach for greater access to public services is needed, including more affordable housing & utilities, life sustaining support: healthy foods, medical, mental & dental care, educational or vocational training that will facilitate independency. Outreach and investing in the children living under the umbrella of Foster Care is needed too." Napier says he will be a strong advocate for the LGBTQ+ community for Civil Rights and Liberties that include marriage equalities, in addition to transgender and homeless youth programs to promote economic stability.

If elected, Napier intends to place satellite offices in Wilton Manors and other impoverished and Middle-Class neighborhoods to facilitate greater access for the constituents who really need advocacy. Currently Congressman Ted Deutch’s field offices are located in the “up-scaled ivory towers” scattered throughout the District in wealthier neighborhoods like Las Olas.

In closing, [Napier]… “I want to extend salutations to the LGBTQ+ community family wishing everyone a safe month of celebration and festive memories. Happy Gay Pride Month and Stonewall Day!”

Mark Napier has made great strides and has successfully submitted required documentation to qualify placing his name on the ballot. For additional information on his biography and story, please visit his website: https://www.napierforcongress2022.org/. Additional articles may be obtained from Napier’s Newsroom: http://www.einpresswire.com/newsroom/napier_for_congress_2022_pr_newsroom/.